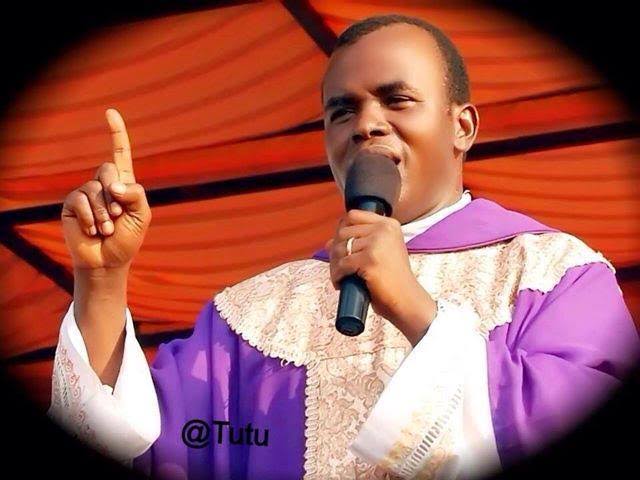 The spiritual Director of Adoration ministry, Emene, Enugu, Rev. Fr. Ejike Mbaka has told the Peoples Democratic Party (PDP) Vice Presidential candidate, Peter Obi that he and his boss would lose the 2019 presidential elections if they failed to make a financial pledge ans take up a project they would carry out in the new Adoration Camp Ground, Emene.

The fiery Catholic priest made the inciting declaration on Sunday during the annual harvest thanksgiving programme of the ministry in Emene, Enugu, Enugu State.

A viral video clip shows the prophet tongue-lashing the ex Anambra State governor after the latter refused making a public pronouncement of the project he and his boss, Atiku Abubakar, would carry out for the ministry.

Mr Peter Obi had stepped up on the Adoration podium, to speak briefly , and perhaps make a pledge , after Governor Dave Umahi of Ebonyi State came on the podium and made a pledge of a project he would carry out for the ministry.

Mbaka who was greeted with elation after Governor Umahi’s pledge, called on Mr Obi , in subtle expectation of a gagantual pledge. But Mr Obi who apparently didn’t come with a categorical pledge to make, addressed the congregation, and told them that he would make his own pledge personnal to the spiritual Director, and not before the congregation.

Unsatisfied Mbaka, pressed further, and asked if Atiku had a message (donation) through him (Obi) for his ministry. Obi’s response to the above question was not on the affirmative. Mbaka, again, pressed further, asked Obi if he had a personal donation to make to support the work of Gid, again, Obi took the microphone and told the him expressly that, he would make whatever pleage he wanted to make personnel to the him (Mbaka).

Mbaka who was visibly rilled that Obi could not make any categorical pledge, took the microphone from Obi and decended on him in a manner that was unclerical and hostile.

The nettled Mbaka, told Obi in clear terms that he and his boss, Atiku Abubakar, would go no where if they failed to execute a project in the Adoration ministry.

Mbaka apparently made it clear that Atiku Abubakar would lose the 2019 presidential election if he failed to take up a project at the ministry.

He said: ” Tell Atiku, that he is going nowhere if he continues the way he is going.

“Atiku, is failing already, in fact, he has failed!

“Stinginess is not good. Make favourable a pleage and get good prophesy. Or else, you people would not know when the election would be conducted in 2019.

“Your brother, Governor David Umahi has made a good pledge and you can see how the people clapped for him. And he would win in 2019. It would be like a trance to you people.

“Governor Ugwuanyi has also said his own. Please, tell us what you would do.”

” Listen to me, If there is anywhere they would tell you lies to make you happy, it is not on Mbaka’s altar.”

” Go and tell Atiku my message. Tell him I want him to come here and tell me what he has to offer to Nigeria.”