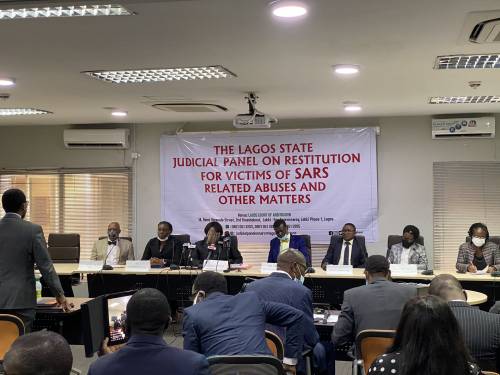 The Lagos State Judicial Panel Of Inquiry set up to address the issue of police brutality has suspended sitting for one week after youths representatives pulled out of meeting in protest against freezing of accounts of some ENDSARS protesters by the Central Bank of Nigeria (CBN).

Sahara Reporters reports the CBN had obtained a court order to freeze the bank account of Bolatito Rachael Oduala alongside 19 others over their role during the #ENDSARS protest.

Oduala, who is also on the Lagos panel as a youth representative, withdrew from the panel sitting today in protest of the move by the CBN.

Her action forced the panel to adjourn sitting for a week.

Chairperson of the panel, Justice Doris Okuwobi  (retired) announced that the panel will reconvene on the 14th of November after major consultation with  stakeholders.