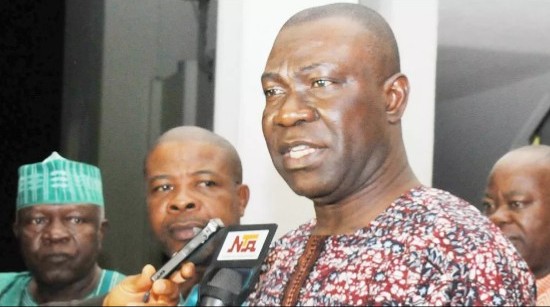 The media space has been agog following Obi’s adoption as Atiku’s running mate on Friday. Nigerians from the South-East extraction have not hidden their joy over the development. Also, Nigerians from other geopolitical zones have taken to the media, to express their excitement on the development, describing it as a perfect combination.

However, what appeared to be a jubilant development took a new twist as South-East stakeholders met in Enugu yesterday where they registered their displeasure over the manner by-which Obi was picked.

The leaders alleged that they weren’t duly consulted by Mr Atiku Abubakar before picking Mr Peter Obi as his running mate.

Contrary to popular views, MERIDIAN SPY has reliably gathered the major reasons why the deputy Senate President, Mr Ike Ekweremadu was among the aggrieved stakeholders who met yesterday at Enugu.

It has been reliably gathered from a source close to the deputy Senate President that his move against Obi’s adoption was borne out of personal interest. The source noted that Mr Ekweremadu was interested in the position of the senate president. According to the source, Mr Ekweremadu had also hoped to be picked as the a consensus VP candidate from the South-East.

However, Friday’s development that came with the adoption of Mr Peter Obi as Atiku’s running mate left both dreams in shambles.

Obi’s adoption by Mr Abubakar politically signifies that someone from the South-East can no longer be the Senate President, should Atiku emerge as the country’s president next year. This calculation is based on the federal character practice and the principle of political fairness.

Consequently, Mr Ekweremadu’s ambition to become the number one man in the Nigerian Senate should PDP win was nipped in the bud.

The source said: ” You know my principal has a plan of becoming the Senate President next year. He has been working towards it for some time now.

“When Mr Abubakar won our party presidential primaries, and the permutation began for a South-East or a South-West vice presidency, he was also hopeful that he may be picked at the end of the day because he also lobbied.

“But on Friday the news of Obi’s adoption as PDP VP candidate broke out, and it saw all hopes dashed,” he told MERIDIAN SPY.

Meanwhile, MERIDIAN SPY has been placed in the know that Mr Chris Uba, a popular PDP chieftain in Anambra state and Governor Dave Umahi of Ebonyi state have been lobbying the PDP presidential flag bearer, Mr Atiku Abubakar, to drop Peter Obi as his running mate for some political reasons which are still sketchy as at the time of filing this report.