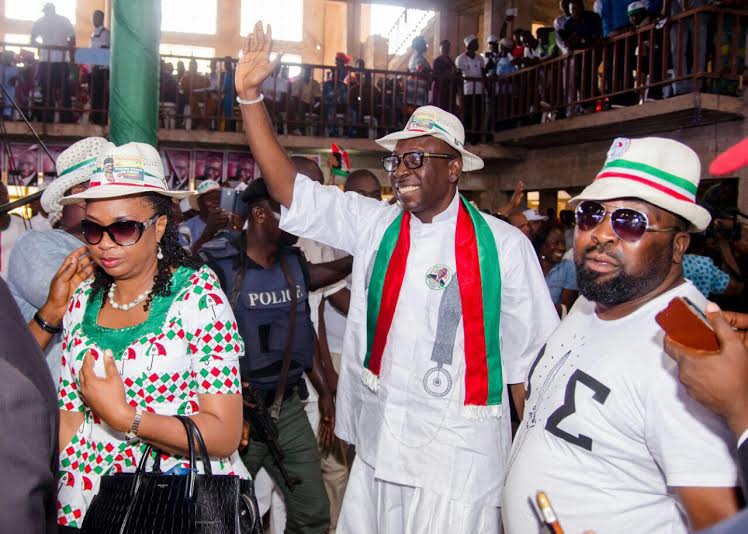 The All Progressive Congress (APC) has responded to the allegations raised by the Peoples Democratic Party (PDP) of plot to rig the forthcoming governorship election in favour of its candidate, Pastor Osagie Ize-Iyamu.

The PDP had Friday alleged plot by APC and its ex-national chairman, Adams Oshiomhole, to procure extra result sheets, with intent on rigging the September 19 poll in the state.

The opposition party said it was aware of how Oshiomhole and “certain corrupt APC leaders” have been threatening and mounting pressure on Yakubu Mahmood, the chairman of the Independent National Electoral Commission (INEC) and other officials of the commission, “to secretly provide them with ballot papers and form EC8 election results sheet to facilitate their plans for ballot stuffing and writing of election results”.

It further called on the Inspector General of Police (IGP) Mohammed Adamu “to stand up to the expectation of Nigerians by immediately inviting Ize-Iyamu to explain his directive to the cultists as well as arrest all the hoodlums shown in the video to forestall their plot of unleashing terror on the people of Edo state.”

Responding to the allegations in a statement on Friday, Yekini Nabena, Deputy National Publicity Secretary of the ruling party, said the PDP was clearly panicking over the widespread support of its governorship candidate and has resorted to “childish and comical conspiracies”.

“Sensing the widespread acceptance and support the good people of Edo State have given the All Progressives Congress (APC) governorship candidate, Pastor Osagie Ize-Iyamu in the lead up to the forthcoming governorship election, PDP is clearly panicked and has resorted to childish and comical conspiracies,” said Nabena in the statement.

“Procurement of result sheets, cloning of PVCs, stealing card readers, vote buying, voter intimidation and other election fraud is the PDP’s stock-in-trade. For us in the APC, it is one person, one vote.

“Our people-focused development records is visible to all and the good people of Edo state are poised to make the right and progressive choice, come September 19.

“We reiterate that our security services must do everything to stop the PDP’s plan to unleash violence, intimidate voters and buy votes during the election.

“Come September 19, votes will count and the will of the Edo electorate will prevail.”