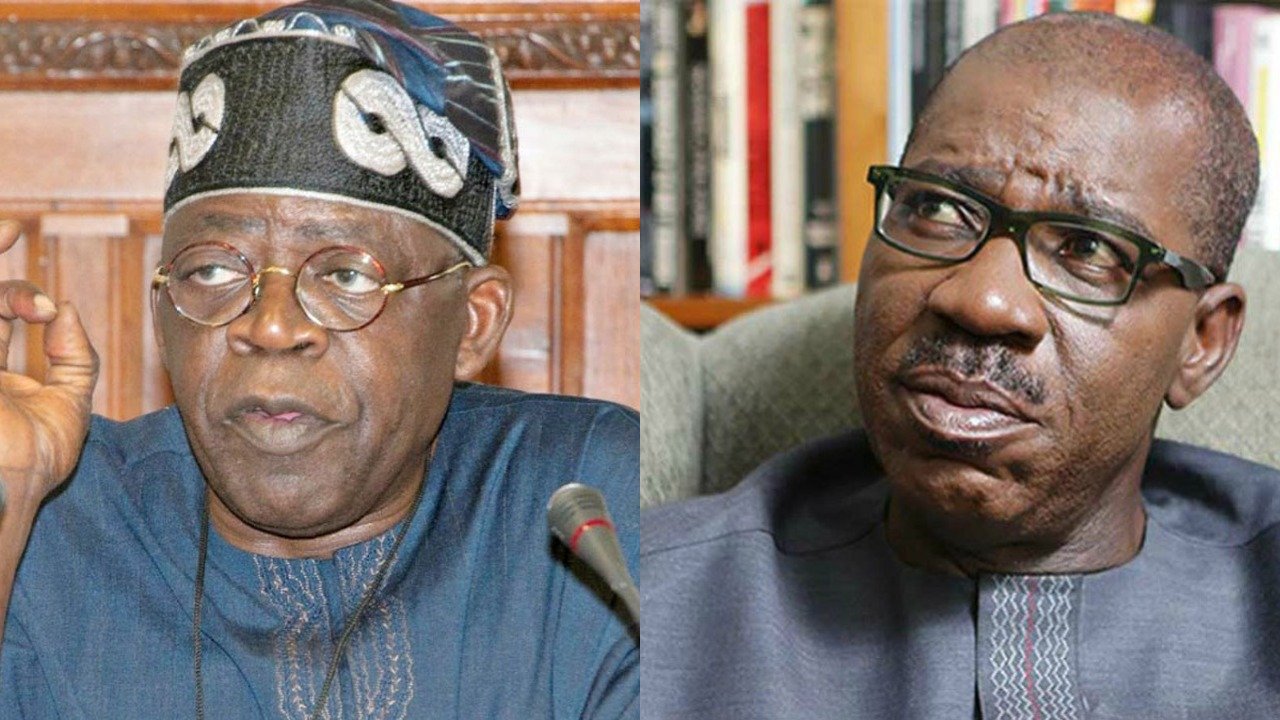 Bola Ahmed Tinubu, National Leader of the All Progressive Congress (APC), has reacted to the recent crisis rocking the Edo State House of Assembly.

There have been series of allegations and counter allegations of forceful take over of the Assembly complex by the state lawmakers who are now divided into two camps, with about seven reportedly loyal to the incumbent Governor, Godwin Obaseki and the other 17 to Pastor Osagie Ize-Iyamu, the governorship candidate of the APC.

Reacting to the unfolding events, Tinubu described Obaseki’s action as an assault on constitutional democracy and the rule of law, adding that the Governor has now resorted to the strong-arm tactics of dictators.

The APC National Leader’s statement is not unconnected to the event on Thursday in which security operatives took over the assembly complex to “forestall any attack on the assembly”, causing the 17 lawmakers loyal to Ize-Iyamu to convene at an undisclosed location, impeaching the Assembly Speaker, Frank Okiye and electing Victor Edoror who was similarly impeached as deputy speaker in 2018, as his replacement.

“The recent actions of the Governor of Edo State represent the gravest possible assault on constitutional democracy and the rule of law and escalation of violence and tension in the state he purports to govern,” said the APC chieftain.

“Not satisfied with making a mockery of our constitution by blocking the timely inauguration of two-thirds of the elected members of the Edo State House of Assembly, Governor Obaseki has now resorted to the strong-arm tactics of dictators.

“First, he sponsors hoodlums to deface, indeed destroy, parts of the House of Assembly Building in Benin, feigning the building is undergoing renovation. Then, he imports sand and gravels to prevent access to the assembly complex. In effect, the man has spent state funds to thwart the very apparatus of the state government he was sworn to uphold. He has squandered public money to defeat the very will of the public. This is tragic beyond words.

“As a pretext for his refusal to allow the Edo House of Assembly to function, Governor Obaseki’s actions are perverse. This is a cowardly act and a move to thwart representative democracy in Edo. No renovation has been planned for the state house building. No appropriation was made in the state’s budget. The only reason any renovation could be deemed necessary is the destruction wrought by his own goons.

“Governor Obaseki’s governance of Edo State recalls the worst excesses of our military past and represents a direct threat to the democratic order. By his refusal to permit duly elected members of the Edo State House of Assembly to perform their constitutional duties, Governor Obaseki betrayed contempt for the people of his state and, unfortunately, his ignorance of Nigeria’s constitutional order. As a Governor he ought to know better than to obstruct the functioning of his own legislature, but perhaps he is in need of a quick lesson.”

Continuing, Tinubu said the governor and candidate of the Peoples Democratic Party (PDP) has placed himself above the legislature, “deciding who gets in and who is shut out”.

He said it is clear that Obaseki is punishing the lawmakers for their loyalty to the APC, adding that: “If every governor behaves as he, obstructing the performance of any legislator who does not pledge to him their undying fealty, the entire edifice of democratic governance in Nigeria would grind to a complete halt.”