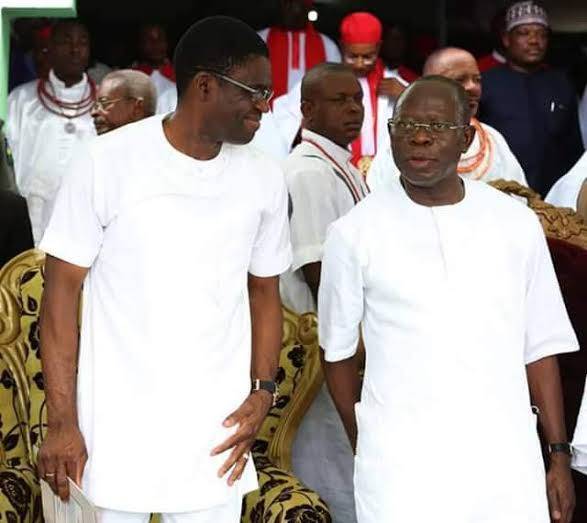 Philip Shaibu, Deputy Governor of Edo State, has alleged that Adams Oshiomhole, who served two terms as former governor of the state, is pursuing a third term bid for the governorship position through Pastor Osagie Ize-Iyamu, the candidate of the All Progressive Congress (APC).

Speaking through his senior special assistant on media, Benjamin Atu on Sunday, Shaibu who alongside his principal, Godwin Obaseki is seeking re-election in the September governorship poll in the state, said Oshiomhole is merelu using Ize-Iyamu as a stooge to perfect his plans.

”The truth is that Ize-Iyamu is merely a stooge. The real man seeking for the governorship position is Adams Oshiomhole who has perfected the plan to betray democracy by seeking a third term in office. The price that Oshiomhole will pay for projecting Ize-Iyamu is an outright rejection,” he said.

“We need a new kind of politics and policies that reflect the best value of our people. Politics that focuses on bringing people together to work for the common good.

“We have displayed determination to end the culture of government that habitually failed to stimulate investment; provide massive employment for the youth and failed to reduce poverty and hardship in the land.

“The people of Edo State subscribed voluntarily to the the principle of Obaseki because they have seen these principles at work all over the state. We cannot risk the future of Edo State with a man’s shrunken aspirations. Good men cannot be shunned away from politics while those who ought to be defending their integrity are parading themselves, as party candidates.”