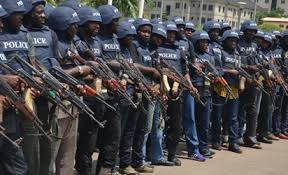 A combined team of the Nigeria Police Force and the Department of State Services (DSS) has taken over security within and outside the Code of Conduct Tribunal (CCT), venue of the scheduled arraignment of the Chief Justice of Nigeria (CJN) Justice Walter Onnoghen, MERIDIAN SPY can exclusively report.

The federal government has filed a 6 count criminal charge bordering on failure to declare his assets against the CJN.

Onnoghen was scheduled for arraignment last week, January 14 but the arraignment could not take place due to improper service of the charge on the CJN, forcing the tribunal to adjourn till today.

As early as 8am, police patrol vehicles had already blocked all entrances into the tribunal premises.

Vehicles and individuals were subjected to screening before entering the venue. While police personnel with police dogs mounted security outside and within the premises, the operatives of the DSS took charge of mainly the gate into the tribunal.

Lawyers, journalists and others with genuine business were allowed into the premises while others who cannot explain their mission were turned back.