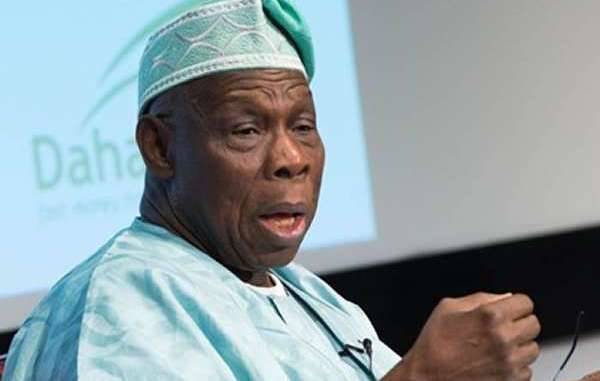 Nigeria’s ex-president, Olusegun Obasanjo says he has returned back to the Peoples Democratic Party, PDP.

Obasanjo disclosed his return to the PDP while speaking at the ongoing book launch of Dr Goodluck Ebele Jonathan, Nigeria’s immediate past president, entitled ” My Transition Hours”, on Tuesday at the Transcorp Hilton , Abuja.

Obasanjo who ruled the country between 1999 and 2003 had denounced his membership of the Peoples Democratic Party, PDP, in the most bizarre manner in the build-up to the 2015 general elections.

Sequel to the nebulous denouncement, the ex Nigerian number one citizen had thrown his weight behind the All Progressive Congress , APC, flagger Mr Muhammadu Buhari as against his own political godson, Goodluck Jonathan.

No doubt, Obasanjo’s support to the APC when it was in the opposition was one of the political catalysts that gave its candidate, Muhammadu Buhari victory during the 2015 presidential election.

In contrast, barely three years after the remarkable incident, Mr Obasanjo told guests who were present at Dr Goodluck Jonathan’s book’s launch today that he was now a fully blooded member of the PDP.

“I am now a full member of the PDP”, Mr Obasanjo affirmed while speaking at the ongoing book launch of Dr Goodluck Jonathan.