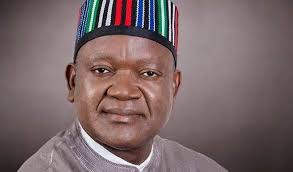 Governor Samuel Ortom of Benue State has explained the reason he wants the ENDSARS protest to continue across the country.

Governor Ortom said so long the protest continues peacefully, it will compel the government to correct its decades of wrongs in Nigeria.

The Governor stated this at the state Government House in Makurdi on Monday, insisting that it was necessary for the country to be restructured.

Speaking further, the Benue Governor told newsmen that as a son of an ex-policeman, he undertood for a very long time how poorly the force has been funded.

“The police should be well funded, trained and equipped so as to perform their constitutional duty of protecting lives and properties,” he said.

“I will join the protest if my people called on me to do so.”

Continuing, Governor Ortom explained that the ongoing protest was not only about #EndSARS alone but impunity occasioned by attacks and killings of harmless farmers by herdsmen without any visible effort by the Federal Government to bring the perpetrators to justice.