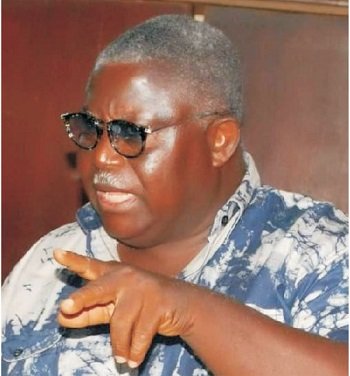 In an interview with The Nation, Emmanuel who is a social activist and TV producer said he never supports zoning but if the presidential election would be based on such practice, it is only fair that the next president come from the old Mid-west region of Nigeria – made up of present Edo and Delta states – and not the Southeast as is being widely canvassed.

“I am not a fan of zoning, I see myself as an apostle of ‘the best should rule.’ I have never supported zoning, but if Nigerians decide to elect the next president on the bases of zoning, I think it is only fair that the next president should come from the old Mid-west region of Nigeria (made up of present Edo/Delta states), and not the Southeast as is being canvassed,” he said.

“A good candidate should win, irrespective of his zone. Chief Moshood (MKO) Abiola proved beyond all doubts that a good candidate can win any election, freely and fairly, without zonal or other agitations as we are seeing now. He won on a Muslim-Muslim ticket with no zoning attached.

“Having said that, I think since the zoning formula has been adopted over the years, it is the turn of the Midwest to be President, seeing that all other regions have tasted the exalted office of the President and Vice President.

“Do not get me wrong, my reference to Midwest is based on the four regions that we operated from 1963 to 1991. It is either we are zoning or we are not. Or could it be that the natural-character of zoning was made for only the majority tribes of Nigeria? If this is so, then the minorities (in Edo/Delta) cannot aspire to the presidency of this nation, even when we are the spinal cord of the nation – we own the oil that runs the nation.”

When questioned why he feels the Presidency should not be zoned to the South East, the son of the former finance minister said, “I have heard arguments in some quarters stating that it is the turn of Ibos to become President of Nigeria. Assuming this will hold water, it is only fair that the Ibo man should come from the only region (Midwest region) which has not produced the President.

“I have always told my friends that zoning breeds greed, tribalism, insecurity, stealing, nepotism, laziness, underdevelopment which ought not to be the norm. However, it’s our right and our turn to produce the next President of the Federal Republic of Nigeria.

“Just some weeks ago, one of Nigeria’s finest Head of State, General Yakubu Gowon, put the blame of Nigeria’s problem today at doorstep of our political leaders. He was very right because these political classes are products of the zoning formula.”

Mr. Emmanuel further insisted that it was the turn of the Mid-West, noting that, “since the creation of the Federal Republic of Nigeria, the Midwest region has not tasted power at the top level, but the three other regions have had their fair-shares. Recall that the first three regions of the country were Northern, Eastern and Western regions. Later in 1963 the Midwestern region was created and it was cut out of the Western region after our leaders’ agitation. Luckily, the child from that struggle is a very important one, because it has crude oil. And it is this oil that is the mainstay of the nation’s economy which is used to keep the country running.”

He added, “It is imperative that I also clearly state that we only have four regions; let us forget those political/geographical titles Northeast, Northwest, North-central, Southeast, Southwest and South-south. All those are political contraptions aimed at furthering the interests of the major ethnic groups on the Midwest and other minority groups in the country.

“As it is now, the latest and most recent regions that have ruled Nigeria are the South and North. It appears that’s the way they want power to continue moving in our country, but we are not having it. We insist on the initial four regions and out of these four regions, it’s only the Mid-West that has not enjoyed power at the top level. We deserve to have it now, since it has gone round the other three zones severally.

“In 1960 to 1966, Dr. Nnamdi Azikiwe (Eastern Region) was President, while Alhaji Abubakar Tafawa Balewa was the Prime Minister from the North (the same North/South divide).

“Today, President Muhammadu Buhari (Northern region) is President and there are agitations that it should go to the Southeast (Eastern Region), what about the Midwest?

“I am saying the Edo/Delta people who made up the former Midwest region are tired of being spectators in the leadership dance; we want to take the dance floor and allow others to savour our steps.”