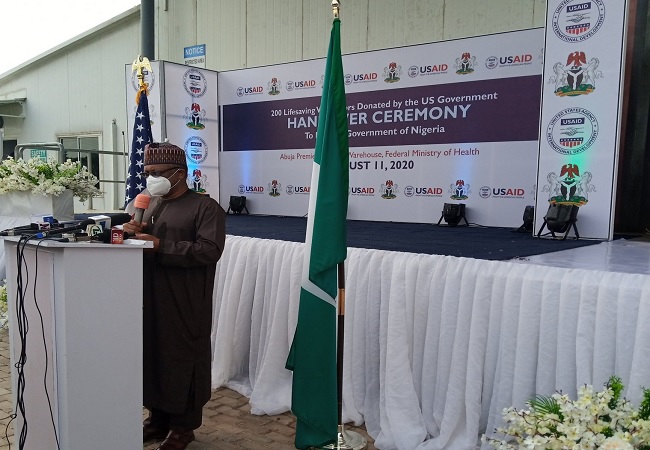 Tolu Ogunlesi, President Muhammadu Buhari’s Special Assistant on Digital and New Media, lashed out at some Nigerians who criticised the Federal Government for organising a ceremony for the delivery of 200 ventilators promised by Donald Trump, US President.

Recall President Trump, in a telephone conversation with President Buhari in April, promised to support Nigeria’s fight against coronavirus with 200 ventilators.

The Federal Government today, Tuesday took delivery of the ventilators amid a ceremony held in Abuja.

“They will certainly be of great benefit to the people of Nigeria and I wish to convey the appreciation of His Excellency Muhammadu Buhari, President of the Federal Republic of Nigeria and of the government of Nigeria, to President Donald Trump and the United States Government for the generous consideration and friendly gesture,” Osagie Ehanire, Minister of Health, said at the ceremony.

When photos of the ceremony was shared by the President’s media aide, he got series of verbal attack by some Twitter users who queried the essence of the ceremony.

But responding to the many critics, Ogunlesi tweeted, “Looks like there’s a fundamental misunderstanding of things here, LOL. It’s a Government-to-Government donation, US Govt to Nigerian Govt. Some kind of ‘ceremonial’ handover is de rigueur for a G2G ‘transaction’ of this nature. Simple Google search throws these up, for example.

“All one asks is that people be sensible enough to speak from position of knowledge—Aka ‘informed’ criticism. As much as yeah too many Govt ceremonies(I agree), there’s reasons why G2G transactions involve something ceremonial. Not sure there’s any getting around that anytime soon

“De rigueur. A simple Google search: South Africa, Colombia, India, Ethiopia. Someone is donating medical equipment worth millions of $$$ to your country & it is you, sitting on Twitter, who wants to decide whether there should be a ceremony or not? You’re either daft or a clown.”