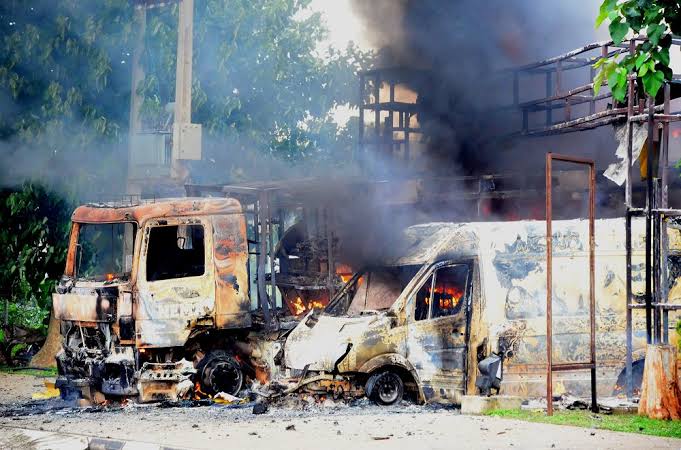 A sub-station of the National Emergency Management Agency (NEMA) at Abuja was set ablaze as the Shi’ites islamic group continues another day of protest.

The Islamic group resumed its protest on the street of Abuja this morning which led to yet another confrontation with the Nigerian police.

The police had attempted to disrupt the protesters march from NITEL junction at Wuse zone 2 and blocked their access to the national assembly road while the angry protesters allegedly set ablaze a Nema substation and two vehicles, an eyewitness claims.

Another eyewitness told MERIDIAN SPY that bullets were fired by the armed policemen at the protesters as they marched towards the Eagle Square. An unconfirmed report has it that a journalist was also shot in the clash.

As at the time of filing this report, firefighters were battling to put out the inferno.

Some roads have been abandoned by commuters as they scamper for safety while in places like Nyanya, traffic was at stand still due to the protesters march along the Abuja roads.

The Islamic Movement of Nigeria, otherwise known as Shi’ites, has continued to protest over the detention of their leader, Ibrahim El-Zakzaky.