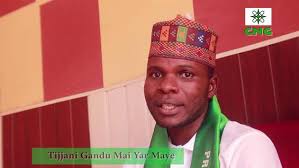 Tijani Gandu, a popular musician in Kano State has left the political camp of Governor Abdullahi Ganduje  for that of the immediate past governor of Kano State, Rabiu Musa Kwankwaso, the founder of the popular kwankwasiyya movement.

The realignment move of Mr Gandu took place on Wednesday  during a clandestine meeting at the Kano State  Government house.

The musician returned some items and cash he initially received from the Kano State Government.

MERIDIAN SPY learnt that the ace crooner returned the sum of N3 million and a vehicle, among other things to the  Ganduje camp on Wednesday.

As at the time of filling this report, efforts made by MERIDIAN SPY to ascertain the reason behind Mr Gandu’s defection proved abortive.