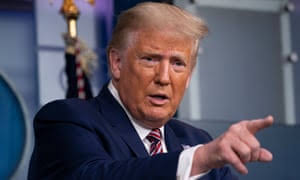 Donald Trump, United States President, has reacted to the successful rescue of an American in Nigeria.

Recall a US citizen, Philip Walton was abducted in Niger Republic on Tuesday and subsequently moved to Nigeria.

U.S. forces, however, conducted a hostage rescue operation during the early hours of Saturday in Northern Nigeria to recover Walton who was held hostage by a group of armed men, according to CNN.

Reacting in a statement released through the office of the Press Secretary, Trump said the rescue operation should serve as a lesson to terrorists and criminals across the world who believe they can kidnap Americans with impunity.

“The former hostage is currently in good health and has been reunited with his family.

“Today’s operation should serve as a stark warning to terrorists and criminal thugs who mistakenly believe they can kidnap Americans with impunity.”