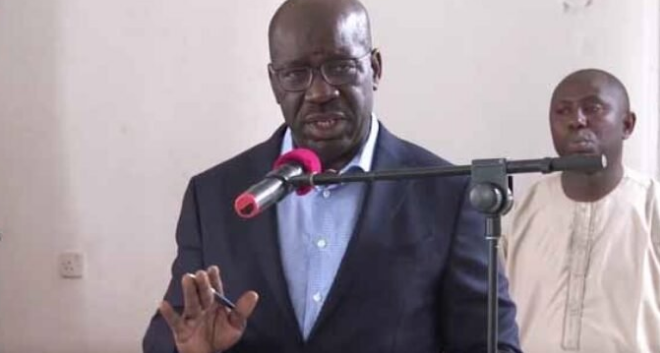 Godwin Obaseki, Edo State Governor, has denied alleged involvement in the arrest of members of the All Progressives Congress (APC) in the state.

Some members of the ruling APC were said to be arrested by the Nigeria Police allegedly on the orders of the Governor.

John Mayaki, Edo APC Publicity Secretary, who claimed that it started in the night of Sunday, alleged that the arrest was meant to harass its members after the governorship election.

However, Crusoe Osagie, the Governor’s Media Aide, reacting on Thursday, described the allegations as false and baseless, noting that it was wrong for the APC to accuse the governor of ordering the arrest of its members.

Osagie said Governor Obaseki is still relishing the victory given to him by Edo voters in the September 19 gubernatorial election, adding that his principal has no time for frivolities.

“The Edo State Governor, Mr Godwin Obaseki, has nothing to do with the alleged arrest of APC members in the state. The Police is an independent institution with a clear mandate to ensure the security of life and property in the country,” said the Governor’s Media Aide.

“The police is controlled by the Inspector General of Police in Abuja and it is wrong for the APC to accuse the Edo State Governor who is still relishing the victory given to him by Edo voters in the September 19 gubernatorial election, of ordering the arrest of its members.”