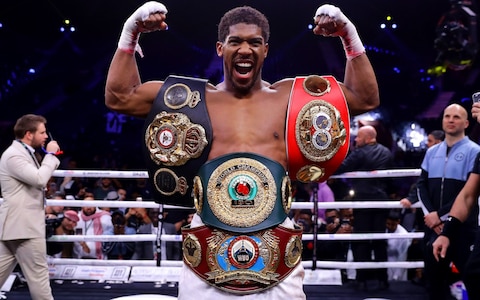 President Muhammadu Buhari has thumbed up for World Heavyweight Boxing Champion, Anthony Joshua, for regaining his belts on Saturday night in a rematch with Mexican, Andy Ruiz Jnr.

The president, in a congratulatory message by his spokesman, Femi Adesina, in Abuja on Sunday, rejoiced with Joshua, saluting him for bringing joy to millions of Nigerians at home and in the Diaspora.

He noted that Joshua’s supporters across the world had rooted for him to regain the titles he lost about six months ago.

“The downfall of a man is truly not the end of his life. There’s always another, and better day. This is a lesson we must all learn from you as a country,” Buhari told the comeback world champion.

He wished Anthony Joshua well ”as he seeks to bring more glory to Nigeria, and to the boxing profession”.

Joshua had beaten Andy Ruiz Jr on a unanimous points decision in Saudi Arabia to seize back the heavyweight world championship belts he lost to his Mexican-American opponent in a shock upset last June.