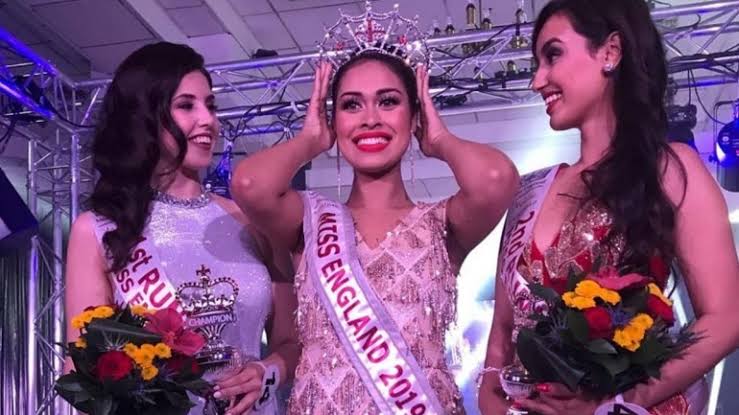 23-year-old winner of the just concluded Miss England beauty pageant, Bhasha Mukherjee has resumed work at her new job, Pilgrim NHS Hospital in Boston, Lincolnshire, as a medical doctor just hours after she won the pageant in Newcastle.

Bhasha won Miss England 2019 on Thursday evening , after conquering hundreds of other models to clinch the crown.

The 23-year-old beauty queen who is said to have an intelligent quotient of about 146 also possesses two Bachelor’s degrees in Medical Sciences and Medicine and Surgery  from the University of Nottingham.

Amazingly, the new England beauty queen who never thought she could win, in the early hours of Friday, August 2, rose at 4a.m. to catch a train to her new job as a junior medical doctor, dumping her tiara.
While speaking to Radio 1 Newsbeat, she said: “I don’t know what I was more nervous about, was it my first day at a job that I’ve studied five years for, or finding out the outcome of Miss England?

“It’s been quite hectic. This week has been one with so many changes for me. I start work today and I’m supposed to be moving house to a brand new city on Sunday,” the multi-lingual beauty queen said.

Expressing pressure of combining two job activities as she headed to work in the morning, she said:“It’s been really nerve wracking, I couldn’t tell if I was more nervous about the competition or about starting my job as a junior doctor”

Bhasha, who was born in India but relocated with her family to the UK when she was nine, head-hunted in 2017 via her social media profile and convinced to compete in a pageant which aimed to increase diversity in beauty contests across the UK, before entering Miss England two years later and being crowned SD queen.
Basha said she decided to go for the pageant to balance out her studying and give her a break.

She however advised people wanting to pursue different careers and pathways to write a physical to-do list.”It’s the most satisfying feeling for people who forget things.”