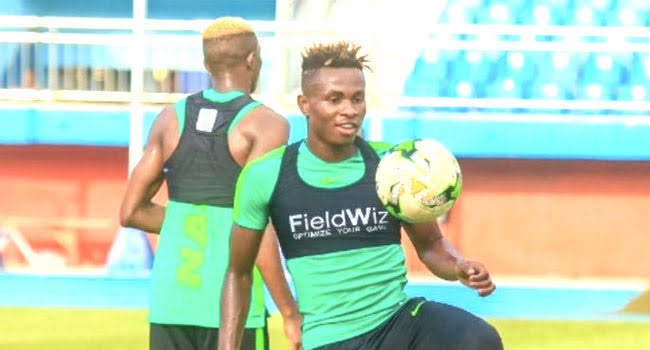 Super Eagles up and coming striker, Samuel Chukwueze has been linked to English Premier League side Liverpool and Manchester United and his new management outfit Roc Nation Sports will be pleased with a move.

Chukwueze signed a contract with the Roc Nation partly owned by rap star Jay-Z last week and they are keen to up the value of the player.

Speaking on the development, Chukwueze’s Super Eagles teammate, Kenneth Omeruo is backing the Villarreal of Spain striker to do well in the EPL.

“If a Premier League club makes an offer for Samuel Chukwueze, of course, every player wants to play in the Premier League and it will be great for him.

“He should take it as long that the contract is favourable and he makes a lot of money out of it.”

“He is young and a very talented player. He is very dangerous to play against.’ Villarreal yesterday confirmed that Chuwkuweze was back in training.

“He’s here! Chukwueze. He has started today his special pre-season training programme at the training ground after playing the Africa Cup of Nations with the Super Eagles. Great to have you back Samu,” read a statement on the club’s twitter channel.

The Super Eagles player will be expected to play a part when Villarreal take on La Nucia in a pre-season game on Wednesday.

The Yellow Submarine will open their 2019-20 La Liga campaign against Granada on Saturday, August 17.