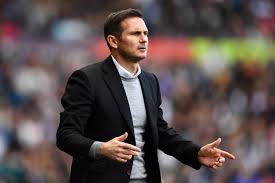 In a statement released on the official website of the club, on Thursday, the club director, Marina Granovskaia, said the team is delighted to welcome its former star back as head coach.

“It gives us great pleasure to welcome Frank back to Chelsea as head coach. “Frank possesses fantastic knowledge and understanding of the club and, last season, he demonstrated he is one of the most talented young coaches in the game,” the statement reads.

Lampard who is delighted about his new appointment said he was proud to be returning to his former club as head coach. And that his main concern is focus on the season ahead.

“I am immensely proud to be returning to Chelsea as head coach.
“Everyone knows my love for this club and the history we have shared, however, my sole focus is on the job in hand and preparing for the season ahead.

“I am here to work hard, bring further success to the club and I cannot wait to get started.”