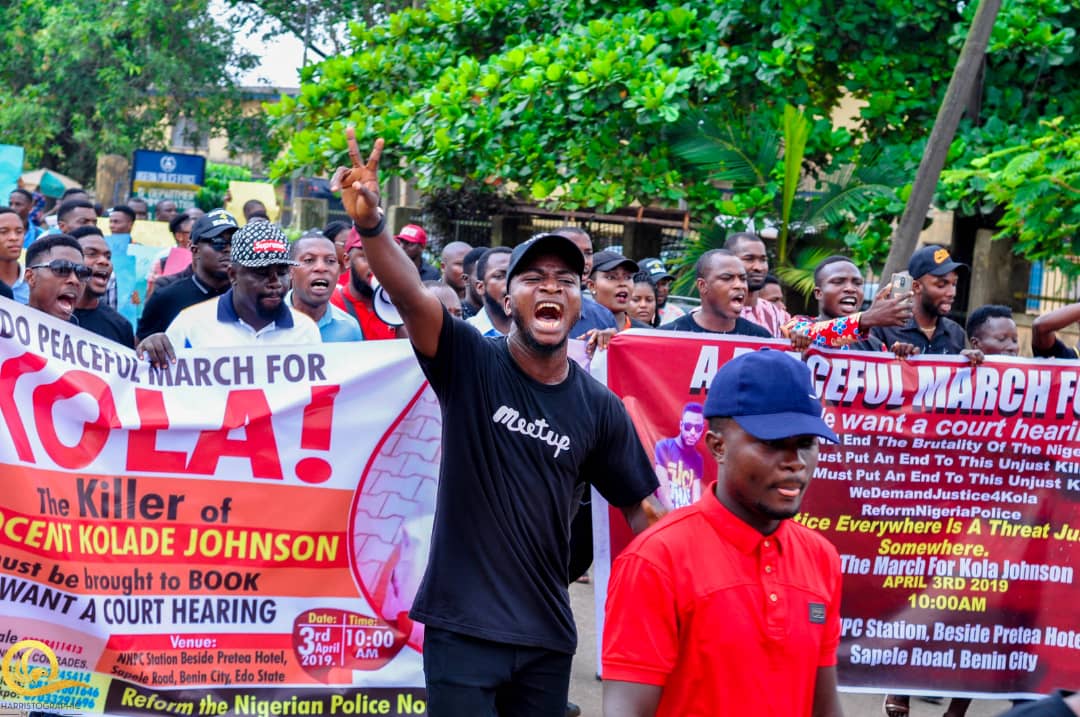 A group of ex-students of University of Benin, under the aegies of ‘Concerned UNIBEN Alumni’ took to the streets of Benin City, the Edo State capital, on Wednesday, to register its displeasure over the killing of Mr Kolade Johnson, an alumnus of the University of Benin who was killed by Special Anti-Robbery Squad (SARS) operatives, on Sunday, in Lagos.

The protest kicked-off at the NNP mega station Sapele Road in Benin metropolis with some UNIBEN Alumni who trooped out in thousands in solidarity of their slain friend and comrade.

The alumni group barricaded some entrances and connecting junctions in Benin metropolis beginning from their take-off point; Sapele Road, through the Edo State Police Headquarters, with songs of solidarity and displeasure.

The spokesman and convener of the group, Oguche Divine Omele, said the protest was to register their grievances in the most peaceful manner over the death of a fellow alumnus, Kolade Johnson, who according to him, was killed due to the recklessness of the SARS operatives.

Omele, also noted that the peaceful match was to tell the Nigerian government and Nigeria Police that enough was enough; stressing that such occurrence would no longer be tolerated in subsequent times even as he demanded for justice for their late friend and comrade, Kola.

Addressing the group on behalf of the Edo State Police Command, DSP Chidi Nwabuzor , the State Police Public Relations Officer, said the the incident was a regrettable one, which also saddens the the command. DSP Nwabuzor also described the act as man’s inhumanity to man.

He told the group that the prosecution process of those involved in the act had begun, and that justice must be served in the end, while pleading with them to exercise equanimity.

President Muhammadu Buhari had also reacted on Kolade’s death on Wednesday, reassuring Nigerians how much his administration prioritizes the life of every Nigerian. The President also extends his condolences to the family of the deceased with strong assurance that all those involved in the act would be brought to book.

The Lagos State Commissioner of Police, Zubairu Muazu , had on Tuesday, paid a condolence visit to the family of the deceased; assuring them that justice would prevail at the end of the day.

Kolade Johnson, until his death was an aspiring music star. He graduated from the department of Business Administration, University of Benin in 2013.

Having spent about five years in South Africa,he returned in 2017 due to the xenophobic attack in the country to pursue his music career at homr in Nigeria.