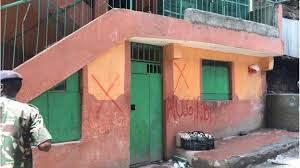 The Lagos state government has commenced the demolition of buildings likely to collapse at Lagos Island.

Government officials are currently pulling down such houses on Freeman street in Ita Faji area.

The development comes two days after a three-storey building on Massey street in the same area, caved in.

Twelve people, including nine children were killed in the incident while 50 were rescued.