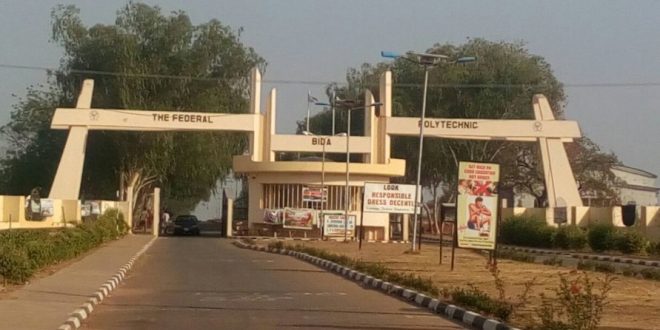 A coalition of various interest groups under the umbrella of Coalition of Concerned Youth and Students for good Governance and Sustainable Education has berate the  Chairman of the Academic Staff Union of Polytechnics (ASUP) in the Federal Polytechnic Bida, Mr Umar Saganuwan over gross misconnduct and leadership rascality.

In an open letter signed by the National Convener of the group, Comr. Adekanbi Sunday and its National Secretary, Comr. Mahmud Ommai Hassan, the group says  Mr Umar Saganuwan who is the Chairman of ASUP, Bida Polytechnic , has become a thorn on the  flesh to both the management of the school under its incubent Rector, Dr Abubakar Dzukogi and the students of the institution who have for some time now been affected by the undue rascality and desperation for power by Mr Umar Saganuwan.

Also, in the letter which was officially addressed to the honourable Minister of Education, Mr Adamu Adamu, the group says Mr Umar Saganuwan has been displaying questionable attitudes since he lost out in his bid of becoming the Deputy Rector of the institution. Hence, he has been perpetuating all manner of violent and intransigent acts just to frustrate the positive efforts of the incubent Rector of the institution, Dr Abubakar Dzukogi.

According to the group, Mr Sanganuwan had on several occasions led group of touts and cultists to distrupt council meetings presided over by Dr Abubakar Dzukogi, the Rector of the institution.

The group, however, endorsed the reappointment of the current Rector of the institution by way of passing a vote of ‘Confidence’ on him; pointing out that the current Rector, Dr Abubakar Dzukogi, has a glaring track-records of effective service delivery and intimidating array of legacies all over the school.

Finally, the group called on the honourable Minister of Education, Mr Adamu Adamu,  to as a matter of urgency sack Mr Umar Saganuwan and his cohorts who have sworn to distablise all efforts geared toward peace, harmony and development in the school by frustrating the noble leadership of the Rector.

READ THE FULL LATTER BELOW:

OPEN LETTER TO THE HONOURABLE MINISTER OF EDUCATION, FEDERAL REPUBLIC OF NIGERIA

Sir,
INCESSANT DESTABILIZATION OF ACADEMIC & ADMINISTRATIVE ACTIVITIES AND CIVIL UNREST CAUSED BY MR UMAR SAGANUWAN, THE FACTIONAL ASUP CHAIRMAN, FEDERAL POLYTECHNIC BIDA
We, members of the above mentioned group, consisting 50 students and youth interest  groups, including the National Association of Nigerian Students (NANS) and the National Association of Polytechnics Students (NAPS), among others,  have decided to write you over the incessant destabilization of academic and administratiive activities in the Federal Polytechnic Bida, Niger State. Having painstakingly made our external and internal investigations on the administratiive chaos in the above mentioned institution, we hereby come up with the root causes of the crisis and the ulterior motive behind the whole issue.
Sir, ordinarily, we would have overlooked the situation in the above mentioned institution, but considering the fact that it has spelt doom on the innocent students, with so much distractions on the part of the institution’s Rector, Dr Abubakar Dzukogi, we have decided to therefore make this noble and expedient move in drawing your attention to the real issue on ground in the institution.
The fact that the incumbent Rector of the institution has done fabulously well cannot be gainsaid by any sincere mind, especially considering the enormity of his giant strides in both academic and non-academic spheres of the school. This we can sincerely attest to.The state  of infrastructural decadence in the school prior to the emergence of Dr Abubakar Dzukogi was sordid in itself. But things have taken a new twist in the last few years courtsey the ever-working and wonderful Rector of the institution who has enjoyed total support and admiration from both students  and staff of the institution, with exception to some disgruntled elements who have sworn to frustrate his good works.

Sir, let us state it categorically here that the Academic Staff Union of Polytechnics (ASUP) Federal Polytechnic Bida Chairman, Mr Umar Saganuwan is the masterminder of the current unrest that has bedeviled both academic and non academic activities in the polytechnic. Their actions are a setback to administrative decorum and sustainable development of the school. The issue is simply a concatenation of bitterness and grievances, selfishly garnered from the reappointment move   of the people’s loving Rector, Dr Abubakar Dzukogi, which is obviously coming due to earnest acknowledgement, merit, proven competence, experience and apparent realities on ground.

Mr Umar Saganuwan, who had wanted to be the Deputy Rector of the institution, had brazenly lost out to the incumbent Deputy Rector in the last contest. Hence, his defeat is the remote cause of the crisis that has plunged the institution into some sorts of unrest, apparent squabbles and  affray. We, can therefore authoritatively say without fear or favour that Mr Saganuwan’s rebuff and frequent attacks on the administratiive system of the school is borne out desperation to be at the helms of affairs, personal hatred for the Rector, who has proven to be far better than him, and sectional gangup from his rapacious cabal who are also embittered and jealous by the good works of the incumbent Rector.

Moreso, Mr Saganuwan has obviously deviated from his core duties as the ASUP chairman of the institution thereby causing nuisance and administratiive unrest in the school. Other ASUP chairmen in other polytechnics  in the country are known for their cooperative harmony with their managements, astute service delivery and sincere dedication to service. But it is not so with the Mr Umar Saganuwan whose sole motive is to frustrate the good works of Dr Abubakar Dzukogi and to tarnish his hard-earned name and reputation.

Without being immodest, Mr Saganuwan is a shameless power bigot, who is known by all and sundry for his malicious, preposterous and nefarious activities on campus. He has made himself a subject of ridicule, disgrace and colossal disappointment to the noble profession of academics. We had expected him to face his family affairs and his students in class rather than joining issues simply because he lost out in a contest that he was not even fit to stand in for in the first place.

Again, Mr Saganuwan has also made himself a huge disgrace to ASUP as a pressure group in the country. He has repeatedly flaunted the existential modus-operandi of the union in exchange for personal aggrandizement and selfish gains. It is our belief that a man who has earned himself utmost disregard in his own department in school, should respect himself enough and thread the path of peace and honour rather than making recalcitrant moves that are capable of sending into an oblivion of disgrace, disrepute and outright humiliation.

Sir, it may shock you to know that Mr Saganuwan is used to hiring thugs and touts to distrupt management’s meeting in the school just to frustrate the genuine efforts of the managment to make substantial progress in both academic and non-academic spheres of the school. He is clearly threatened by the intimidating successes and track-records of the incumbent Rector, Dr Abubakar Dzukogi, who has convincingly done well.
Particularly, one of the major effects of the Saganuwan’s selfish tussle for power is the frequent internal strike in the institution for some time now. The Federal Polytechnic Bida is known for its track-records as a pacesetting citadel of learning with respect to both academic and non academic activities. But due to the Saganuwan’s unrest, the school has been forced into some period of internal strike, repeatedly. This is quite unfortunate and unacceptable, especially considering the fact that it is all borne out of one man’s desperation.
The strikes, which are different from the normal ASUP nationwide  strike have crippled down the rapidity and speed of academic activities in the school; invariably, causing severe setbacks to the students. This gives us deep concern as a group that agitates for sustainable and progressive educational curriculum in all higher institutions in the country.

Sir, having concluded our findings on the whole matter, with palpable attestation of the wonderful works of the incumbent Rector, we hereby throw our weight behind his ‘reappointment’ on account of capability and results as duly recommended by the institution’s Governing Council. He who has done well, let him be given another chance. Dr Abubakar Dzukogi obviously remains the most competent for the job and we’re not hiding our support for him.
Having drawn your respected attention to the sordid and nefarious acts perpetuated by the touts and shameless or embittered ASUP-BD chairman, Mr  Umar Saganuwan, we wish to call for his immediate suspension alongside the staff who have joined him to put the institution in its current stead of unrest.  We demand their prosecution at the instance of their anti-education policies in the school.
Consequently, we also hereby pass a vote of No Confidence on him and his unscrupulous cohorts who have been holding the school hostage for their own selfish reasons for some time now. Sir, we strongly believe that an action in the above direction from you would pass a strong message of warning to other academics who have chosen to play the ostrich in their respective offices.
We, therefore, patiently await your swift response to the effect of the issues raised herein.
Thanks in anticipation!