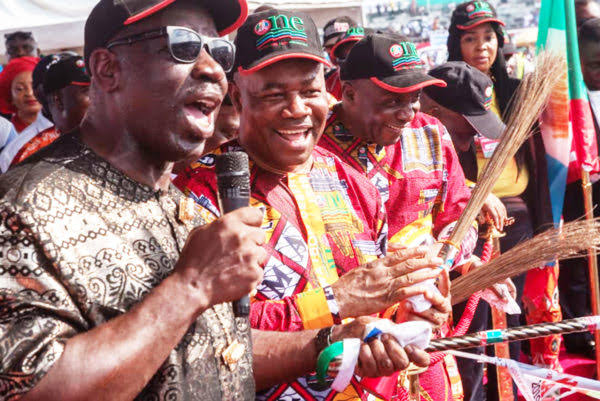 The Edo State governor, Godwin Obaseki, has on Tuesday urged residents and people of Akwa Ibom State to vote for the candidate of the All Progressive Congress, APC , Mr Nsima Ekere in the forth- coming general elections in the State.

The Governor who was on solidarity campaign visit at the APC gubernatorial flag-off in Uyo, Akwa Ibom State capital, told the people that he was at the flag-off to let the know two things; first, that Edo is the gateway to south-south, secondly, Akwa Ibom on its own is the heart of south-south.

Governor Obaseki noted that Akwa Ibom  State used to be the envy of other states in the south-south region when they had a governor like Godswill Akpabio  who made a difference.

He said that if Edo State with its little allocation could be at its current level of development and good governance, there was no reason Akwa Ibom whose allocation is far more than that of Edo would not be developed and as well  experience good governance.

“Let me tell you something that is very important. Edo State receives one fifth of what Akwa Ibom receives from the Federal Government. When Edo gets N10 naira, Akwa Ibom gets N50. Look at what we have done in just two years in Edo.

He appealed to the people to throw their weight behind the APC gubernatorial candidate, Mr Nsima Ekere, who according to him, has proven a mark at the Niger Delta Development Commission that would forever be remembered.