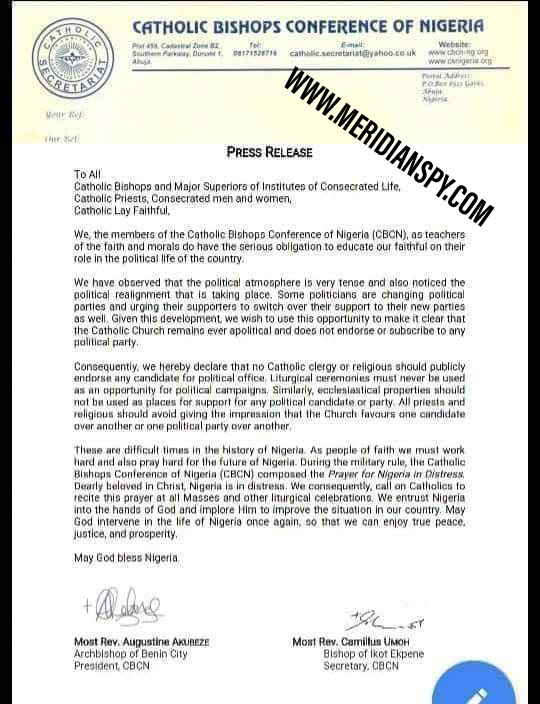 The Catholic bishops Conference of Nigeria (CBCN) has dissociated itself from the spiritual director of Adoration Ministry, Rev. Fr. Ejike Mbaka.

In a statement jointly signed by its President, Most Rev Fr, Augustine Akabueze and its Secretary, Most Fr Rev. Camelius Umoh, which was made available to MERIDIAN SPY on Monday, the body noted that it was not obilivious of the new political trend that has greeted the polity of the country recently and the realignment of politicians to different camps.

The body, however, expressly addressed the fact that the Catholic Church remains completely apolitical as it is not in it’s custom to endorse candidates during elections.

It went further to warn that no Catholic clergy should endorse any candidate ahead of the 2019 elections for any reason – noting that liturgical ceremonies should never be used for political campaign.

The Conference also admonished Catholics all over the country to always say the “Prayer of Distress” for Nigeria as the country needs God’s intervention among other things.

The statement reads in part: ” We the members of Catholic bishops Conference of Nigeria (CBCN), as teachers of faith and morals do have serious obligation to educate our faithful on their role in the political life of the country.

“Given this development, we wish to use this opportunity to make it clear that the Catholic Church remains ever apolitical and does not endorse or subscribe to any political party.

“Consequently, we hereby declare that no Catholic clergy or religious leader should publicly endorse any candidate for political office.”