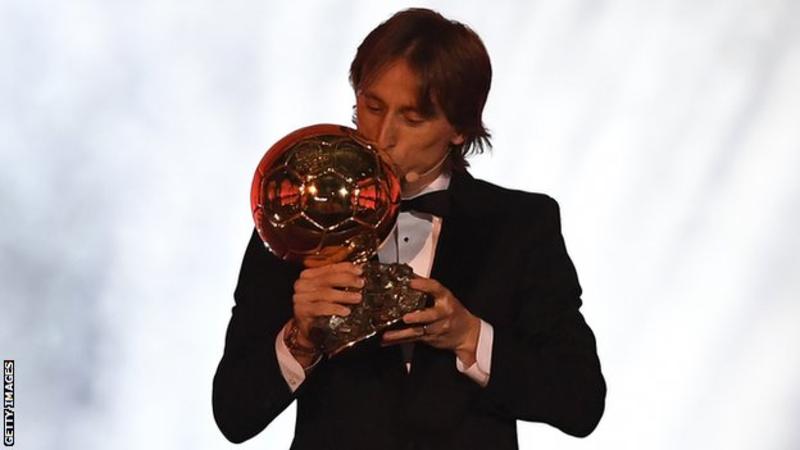 Luka Modric has been announced as the 2018 Ballon d’Or winner. He was announced the winner of award in Paris on Monday.

Modric 33, scalled through the competition against the likes of Cristiano Ronaldo, Antoine Griezmann and Lionel Messi to be named the winner of 2018’s Ballon d’Or.

The Real Madrid midfielder played a pivotal role for his club as they stormed to a third consecutive Champions League title, as well as captaining Croatia to second place at the 2018 World Cup in Russia.

Modric has therefore become the first player to break Messi and Ronaldo’s duopoly of the award since 2007, with Brazil icon Kaka being the last to lift the trophy before the Argentine and Portuguese stars collected five each across the following years.

“It’s an unbelievable feeling,” said Modric, the first Croatian player to win the award. “It’s a big pleasure to be here among all these players.

“I am still trying to realise that I have become part of a group of exceptional players to win the Ballon d’Or.”

Modric described Ronaldo and Messi as “phenomenal players”, adding: “To win means I did something really special on the pitch this year, that’s why 2017-18 was the year for me.”

The former Tottenham midfielder, who began his senior career with Dinamo Zagreb, thanked his parents for the “sacrifices” they made to allow him to become a professional.

“In my career I’ve realised that hard work and persistence in difficult moments sets the foundation to show your talent,” he added.

“One phrase I like to say: ‘The best things never come easy.’ For me to achieve all this, nothing was easy.”