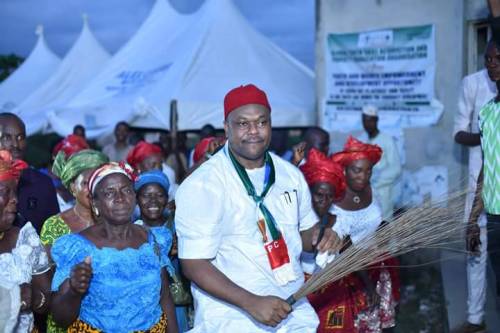 “Make me governor and in two years if you don’t see significant transformation across the state, write me off,” Ochei stated.

Delta State All Progressives Congress (APC) front-line governorship aspirant and former Speaker of the State Assembly, Victor Ochei, has restated his determination to bring transformation to his state, stating that if he failed to fulfil his electoral promises, the people should “write him off”.

Ochei also challenged Okowa to show the people of the state his performance card in the last three and half years to warrant his re-election in 2019.

Ochei stated this on Wednesday while announcing his intention to contest in the governorship election in the state.

Addressing APC leaders and stakeholders drawn from Oshimili South, Oshimili North, Aniocha North and Aniocha South Local Government Areas of the state that makee up the Aniocha/Oshimili federal constituency in Asaba, he also challenged the governor declare how much he met in the state treasury when he assumed office.

He said: “Okowa’s administration is the worst government since the creation of Delta State. In three and half years, Okowa is still parading people’s projects. I am ashamed of what I see in Asaba. This is the smart-less governor I have ever seen. Shine your eyes and elect candidates that can lead the state to the promised land.

“Okowa kept saying he met huge debts to the tune of about N638 billion, when he assumed office as governor, but has refused to declare how much he also met in the state’s coffers.

“How much did you meet when you assumed office as governor? We are informed and we know what we are saying. I challenge Okowa to a debate on the affairs of Delta State. Let Okowa come forth and declare how much he met in Delta State coffers when he assumed office. I was speaker in this state and we passed budgets and I can tell what we have in the books. He should stop bamboozling Deltans about debts. Okowa has disgraced us enough, so we have to change him now.”

Speaking on projects, he said: “Take a look at Asaba, the state capital and the Aniocha/Oshimili federal constituency and draw your conclusions about the Okowa-led PDP government. It doesn’t take donkey years to bring transformation to a state like Delta if you know what to do. I left my imprints at the Delta State House of Assembly in the three years of my speakership. Make me governor and in two years if you don’t see significant transformation across the state, write me off,” Ochei stated.

The APC governorship hopeful advised the party members who had not been registered electronically to do so immediately, noting that their votes would count on the day of reckoning.

Similarly, at Agbor, headquarters of Ika South local government area of the state, while addressing party faithful during a consultation visit to Ika Federal Constituency in furtherance of his governorship ambition, Ochei, asserted that any serious administration does not need more than four years to turn around the fortunes of Delta State.

“Since the people reserve the right to choose a governorship candidate, I can’t shy away from fraternising with them, because a ‘General’ that cannot meet and feel free with his troops lacks the basic leadership prerequisite. My desire to build a new Delta is premised on justice and equity in all ramifications. As such, the Delta North senatorial district must complete its remaining four-year quota and it follows that an APC governor of Delta North extraction will mount the governorship saddle come 2019,” Ochei said.

On the mode of primaries, Ochei declared for direct primaries and called on other aspirants to endorse it, noting that the touted fear of insecurity as inconsequential.