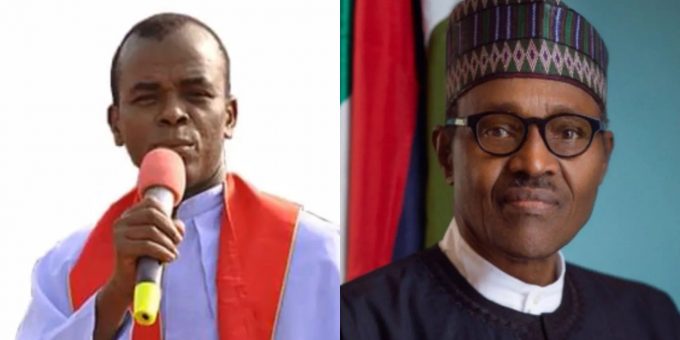 Ejike Mbaka, a Catholic priest and the spiritual director of Adoration Ministry, Enugu, has asked President Muhammadu Buhari to apologise to Nigerians for bad governance.

In his sermon titled ‘Impure heart’ on Sunday, Mbaka who is well known to be a staunch supporter of President Buhari said the recent ENDSARS protest was not an attack on any government but against bad governance in the country.

The Catholic clergy said the president has surrounded himself with “criminals” and “hooligans”.

“Buhari, who could have been a solution to this, succeeded in encircling himself with criminals and hooligans, people who do not just tell him lies, but rather, they magnify lies and feed him!” he added.

“This is not about #EndSARS or IPOB. Nobody is fighting any government, we are fighting bad governance. This country can never be the same again!

“Did you expect these young men to keep watching the country being swindled and looted dry by the so-called leaders?

“Some of the young men, who are now fast getting old, had started working for the criminals in authority, hooligans in power, since they were very young.

“I know that by the time some of the leaders listen to this message, they will begin to attack Fr. Mbaka. But that is their headache, not mine. One day, enough will be enough. Look at crime upon crime.

“Just one day that they came out to say they are not happy, you began to kill them. And after killing them, you carry their corpses and dump inside rivers and valleys? Nigeria can never be the same again!”

Mbaka further added that the “hooligans in power” think that “the world is their home,” accusing them of looting Nigeria’s common wealth.

“They have acquired houses and other possessions in Abuja and other areas within and outside the country, with our wealth, but they cannot be wise to build good industries to provide jobs for our growing youths. That is my worry,” he said.

“Our leaders seem to be reaping the seeds that they had planted. When somebody that you had not given job comes out to say that he is hungry and angry, it was you that attracted such protest, in the first place.”