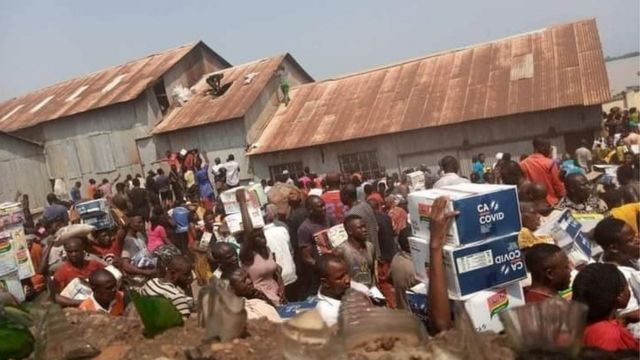 The Nigeria Labour Congress (NLC) has asked the Federal Government to order the immediate release of all COVID-19 palliatives stored in different warehouses across the country.

The request by the labour union was in reaction to the widely circulated videos of citizens mass storming and looting COVID-19 relief welfare materials and provisions stored away in different warehouses.

While condemning the looters for their actions, Ayuba Wabba, NLC President, in a statement on Monday, equally deplored the conduct of some government officials who stored away the relief materials that should have been distributed to the masses at the critical time of its need.

Wabba further asked the government to investigate the conduct of the officials who allegedly hoarded the palliative provisions.

“The Nigeria Labour Congress has followed with keen concern the unfolding incidents across the country of mass storming and looting of relief welfare materials and provisions stored away in different warehouses,” the statement reads.

“These relief palliatives and provisions are believed to have been procured by government to relieve citizens of the impact of the Covid-19 lockdown and the associated hardship.

“It is obvious that the palliative provisions that were procured by government for immediate distribution to the mass of our people at their critical time of need and to assuage the hardship occasioned by the lockdown were hoarded and held back by some government officials.

“The reasons for this have not been made known to the public. We also understand that many of the palliative provisions are already getting rotten in the warehouses where they were stored.

“While we condemn the ensuing mass looting of both the Covid-19 palliatives and non-Covid-19 palliative materials, we equally deplore the conduct of some government officials who stored away relief materials that should have been distributed to the masses of our people at their very trying times of need.

“We call on the Federal Government to investigate the conduct of those who hoarded the palliative provisions.

“In order to forestall riotous plundering of the remaining relief palliatives, the Nigeria Labour Congress demands that the Federal Government should order the immediate release of all the welfare provisions and materials to citizens.

“As we had demanded in the past, the distribution of the palliative provisions should be transparent, and inclusive with active participation of mass-based citizen groups.

“This directive should apply to state governments many of which are chiefly culprit in this regard. Government officials cannot afford to create a scenario that precipitates mass unrests at this very delicate and fragile milieu in global history. A stitch in time would save nine!”