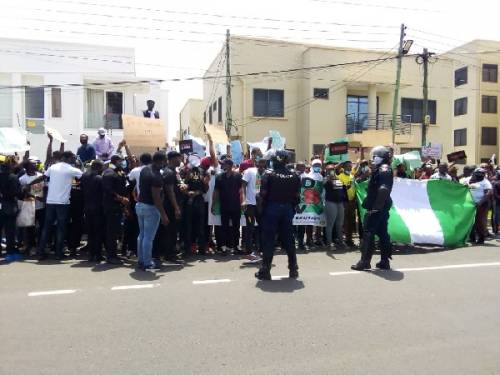 Some Nigerians in Accra, Ghana have joined the march against police brutality and abuse of rights in Nigeria.

According to Sahara Reporters, the protesters, who assembled at the forecourt of the Nigerian High Commission in Accra in their numbers, were seen wielding placards with the now-famous inscription, #EndSARSNow.

Clad in customised T-shirt reflecting the purpose of the protest, some others were spotted with similar inscriptions: ‘Stop Police Brutality’, ‘PMB Give Us Electricity’, ‘Nigerian Youth Will Not Be Silenced’, ‘Having A Laptop Is Not A Crime, #ENDSARSNow’.

Accra is the second city in the Diaspora to join in a physical protest after London.

The protesters, who were mostly students and entrepreneurs, described the protest as a clarion call to the Buhari administration, noting that the voice of the youth is the loudest, hence it must be heard.

They indicated that the constant battery, theft, harassment, blatant extortion and in some cases, extra-judicial killings of young Nigerians by personnel of SARS had become unbearable. According to them, every youth in Nigeria has fallen prey to the infamous special unit.

They reckon that dissolving SARS would not bring the needed closure to the many families of victims of police brutality.