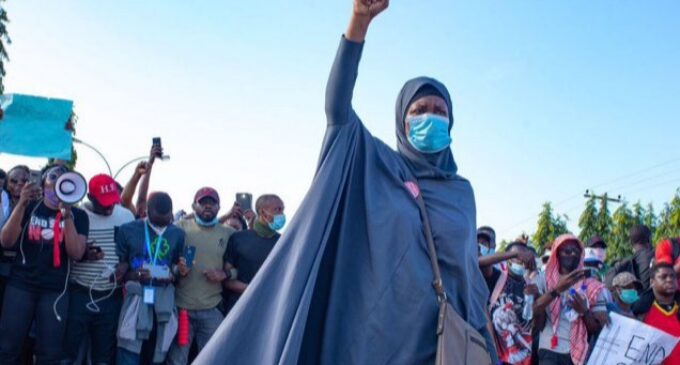 Women like Aisha Yesufu are like comets; they come once in a generation bearing the torch of truth, courage and resilience. They are lodestars, shining light on the path to a new world where humankind can thrive without chains and shackles. They are definers of the age; excellent species of their kind.

Aisha bestrides the civic landscape like a rodeo rider, bringing to submission revilement from traducers and hangers-on of the corrupt and oppressive political class – only with her clenched fist and dauntless voice.

The Chibok girls’ abduction of April 14, 2014 coerced Aisha out of comfort. She was among many other women, who marched on the national assembly to demand the rescue of the schoolgirls in the unwelcoming rain of April 30, 2014. I was there. I saw the power of purpose and the passion for humanity. Many months after, as the number of those who converged on the Unity Fountain in Abuja for sit-ins withered, Aisha stood holding the candle in the blizzard of state dilatory antics and attacks.

But the question has always been. What is her game? Who is sponsoring her? Where is she from? Who is her father? Who is her husband? What is her political leaning? Why is she doing this being a Muslim?

Well, Aisha persists in confounding the questions about her. She has thrust her background to obtrusive corners and put herself up by the petard for scrutiny. She is neither a political adventurer nor an activist of fortune. She is a woman dead to self and to whom death has no victory.

Aisha shared her philosophy on mortality in an interview with TheGuardian: ‘’When I was 10 years old, I came to the realisation that the worst thing any human being can do to me is to kill me. I don’t even know how I came about this thought. I am someone who always thinks that anything can happen. But then, I realise that no matter what, I am going to die anyway. So, basically, dying is not really the worst thing. Death is inevitable, and as a Muslim, I believe that my life is in God’s hands. Whatever is destined to happen will occur. While growing up, I didn’t fear human beings. I have respect for people, but not fear because I know at the end of the day, there is one Supreme Being and it is only Him I fear. So, as long as I have the right conscience with my God, I am good.’’

Defying the religious orthodoxy, Aisha, the hijab-wearing revolutionary, deconstructed the culture of silencing women in these words: ‘’First of all, I am not from the north. A lot of people always make the mistake of thinking I am from the north, though I was born and brought up in Kano. I am from Agbede in Edo state. I am an Edo woman and married to an Auchi man. Some people say a woman should not be heard, especially a Muslim woman. But over time in history, there have been exceptional women, who stood out in the Muslim world and did a lot of things. We have people like Aisha, one of the prophet’s wives (peace be upon him), who would stand for justice and would not tolerate any form of injustice. She was very outspoken, very intelligent and very knowledgeable. There was a time she went to war against a particular caliphate that was involved in some issues she felt wasn’t right.

”Relegating women to the background is not about Islam. It’s about the culture of those involved. The woman has many places in Islam. Yes, there are some things she cannot do, but overall, her right has been given to her and she has a lot she can do. She has a right to property, she can inherit, she can be inherited from and there is child support in case of divorce. But these are things people don’t do again; they forgot and tie things to Islam. Being a Muslim woman doesn’t mean one cannot have one’s voice out there.’’

And why does she keep going despite the minatory onslaughts? Aisha has always said she only seeks a country where ‘’the son of a nobody can become somebody without knowing anybody’’. This is it. This is why her fist is always raised high and her voice blaring from its compartment. She is not stopping. She led a protest against police brutality on Saturday in Abuja where citizens faced yet another savagery. They were gassed, assaulted and reviled.

We cannot stop. We should not stop. Not now. And never. Let the struggle of Aisha inspire us to a new epoch; a revolution against the status quo. We have nothing to lose but our papyrus chains.

We can all be Aisha Yesufu. We just need courage, strong principles, purpose, our voice and a clenched fist.