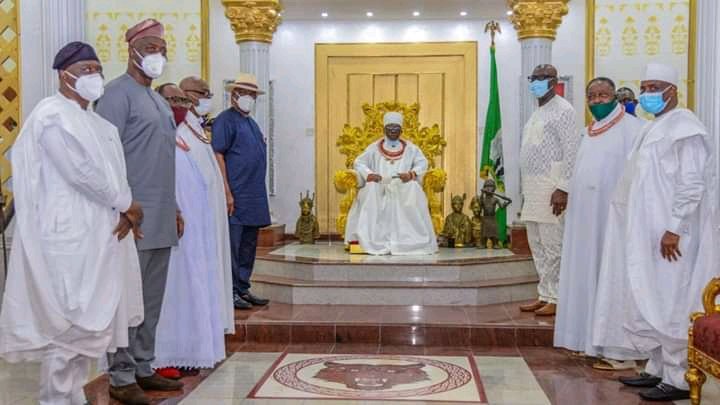 Oba of Benin, Oba Ewuare II, has urged leaders of the Peoples Democratic Party (PDP) not to become godfathers to Governor Godwin Obaseki who won his re-election in the September 19 governorship election in Edo State under the platform of the party.

The Oba made the appeal when five governors of the PDP, including Governor Obaseki, paid a thank you visit to the monarch at his palace on Tuesday.

Oba Ewuare charged the PDP leaders to guard against godfatherism and not allow unscrupulous members kill their party.

“I appeal to the governor to let bygone be bygone, all are gone now and I have told him that he should stretch out the olive branch for all sides to work with him. All hands should be on deck to work for Edo state and Edo people everywhere they may be,” said the monarch.

“I said the whole world is watching Edo state and I said, don’t worry it is not what they think will happen that will happen. Come the election, there will be peace and I begged my ancestors and that if it is only that we can achieve, I will thank our God.

“I want to on this occasion plead with the PDP to guard against godfatherism and not to allow unscrupulous members kill your party.

“I will tell the PDP governors not become hidden godfathers that will be controlling Governor Obaseki.”

On his part, Governor Wike thanked the Benin monarch for his apolitical stance during the polls.

“We made a promise when we came on a courtesy visit during the flag off of the PDP campaign in Benin that by the grace of God if we win the election, we will come back again to say thank you.

“On the 19th of September, 2020, the Edo State Governorship election was conducted and on the 20th, our candidate, Godwin Obaseki was declared winner.

“You made a promise that as a father to everybody you will be apolitical and will pray with your chiefs and Edo people for peaceful elections.

“Indeed, you gathered Edo people and prayed and God crowned your prayers with a peaceful free and fair elections.

“Having fulfilled your promise, it will be unfair for us not to come and fulfil our part.

“That is why we are here today on behalf of the PDP to fulfil our promise by thanking you and the palace chiefs.”