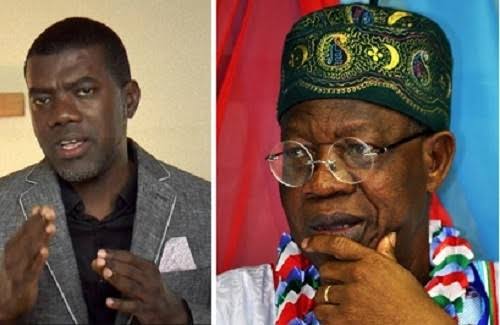 Reno Omokri, a former aide to ex-President Goodluck Jonathan, has countered Lai Mohammed, Minister of Information, that the Jonathan administration is to be blamed for the recent hike in electricity tariff.

“Before we came in, the power sector had been privatised by the previous administration, but the people they sold to them are incompetent. When we assumed power, we met the mess. Apart from the fact that the distribution companies (Discos), could not meter the people, they also could not pay for the electricity generated by the generation companies (Gencos), from the Nigerian Bulk Electricity Trading Companies,” Omokri quoted the Mohammed to have said.

Countering the Minister, in a statement on Sunday, Omokri said the Minister’s comments contradicted those made by Babatunde Fashola, who served as minister or power during the first term of the Buhari administration.

Against the statement by the Minister of Power, the former presidential aide attributed the improvement in electricity generation and distribution to ex-president Jonathan’s administration for carrying out the privatisation of the two segments of the electricity sector.

He argued that the Buhari administration has not built even one power station. Adding that the last power station ever initiated, started and completed, is the 750 MW Olorunsogo II Power Station in Ifo Local Government Area of Ogun State, built by the Jonathan administration, and commissioned by then President Goodluck Jonathan on Friday, February 20, 2015.

“The reason Mr Fashola was able to boast about increased power generation and distribution in 2018, is because the privatised generating companies have increased their capacity,” he said.

“As you can see from the above, Lai Mohammed’s words clearly contradict Tunde Fashola’s words. Both statements cannot be right. One of them must be lying.

“The truth of the matter is that the weak link in the power sector is not the privatised power generating and distributing company, but the Transmission Company of Nigeria (TCN), which has not been privatised, as it should have been, and which is still managed by the Buhari government.

Omokri further explained that the devaluation of the naira has caused distribution and generation companies losses because they took huge dollar-denominated loans to buy their assets and expand their generation capacity.

“Another challenge faced by the sector is that under the roadmap to power sector reforms, the government was meant to complete the privatisation of the power sector by selling off the transmission sub-sector. However, the Buhari administration has failed to do so,” he noted.

“Rather than invest money in developing gas to power infrastructure, the Buhari administration showed extreme profligacy by budgeting $500 million to ‘digitalise’ the Nigerian Television Authority, a network that does not even have a market value of $50 million, proving that no matter how much money you give a man, it will never be enough if he does not know how to use money.”