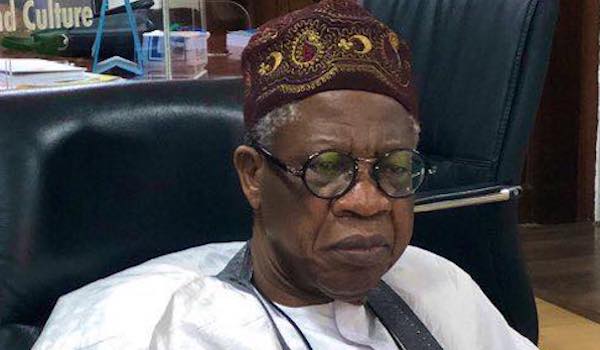 The Federal Government has said it is not going back on its position on the controversial water resources bill.

Lai Mohammed, Minister of Information, stated this at a press conference on Tuesday, while explaining that the bill is a consolidation of four existing laws aimed at the efficient management of water resources in the country.

“Gentlemen, there is nothing new about the National Water Resources Bill. This is because it is an amalgamation of Water Resources Laws that have been in existence for a long time,” said Mohammed.

“So, why are the laws being repackaged as the National Water Resources Bill 2020? The answer is that they are being re-enacted with necessary modifications to bring them in line with current global trends as well as best practices in Integrated Water Resources Management (IWRM).

“The overall objective of this amalgamation is the efficient management of the water resources sector for the economic development of Nigeria and the wellbeing of its citizens.

“Contrary to what is being perpetuated, water resources in a state that do not go beyond the particular state are not regulated by this bill.

“You can now see that many of those condemning the National Water Resources Bill 2020 either have not read it or do not understand its provisions. Also, we cannot rule out deliberate mischief by some of those who have been portraying the Bill as a new source of conflict.

“We are therefore using this opportunity to appeal to Nigerians to avail themselves of the provisions of the bill to avoid being misled by those who have chosen to politicise it.

“We also want to state that the bill is for the good of the nation, and has no hidden agenda whatsoever.”