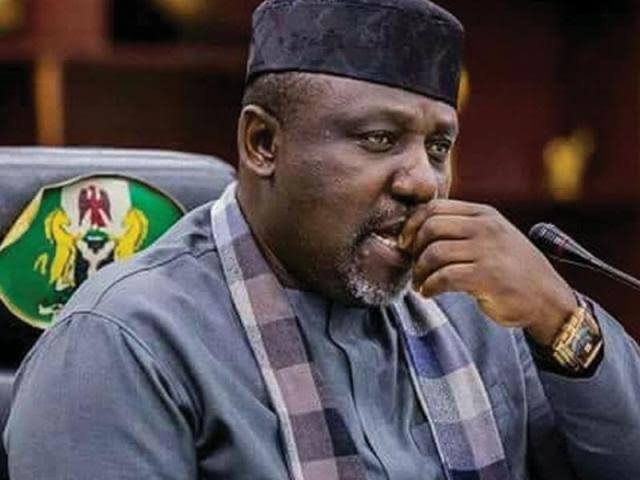 The Independent National Electoral Commission (INEC) declared Obaseki winner of the September 19 governorship election on Sunday, after securing 307,955 votes to beat his main opponent, Osagie Ize-Iyamu of the All Progressives Congress (APC) who polled 223,619 votes.

Speaking to newsmen on Sunday, Okorocha said his congratulations was for only the Edo people and not the Peoples Democratic Party (PDP), stating that Governor Obaseki’s victory was a revolutionary against injustice by the people of the state.

Recall the Governor was disqualified from contesting the APC primary election over defects in his certificates which led to his exit from the ruling party to the PDP.

The ex-Imo governor, however, described the APC loss in the polls as ‘unfortunate’, while blaming injustice in the party as a reason for the defeat suffered by the ruling party.

“If the report I am getting from Edo is not quite interesting when injustice comes into a matter, the centre can no longer hold and that is the problem of the party. I forewarned about what is happening today in our party and if the result in Edo comes out and PDP wins, it means we don’t have APC in the South-South. That is a bad sign,” he said.

“In the South East, literally we can say we don’t have APC, we just managed through the Ben Johnson way to get one state and that does not make our image good.

“The same party under the leadership of a president, a man we considered a clean man, an honest man, a patriotic man and these are happening, that means it is unfortunate.

“They want to stand up for injustice, Edo people are not docile, they know what they want and how they want it.”

Commenting further on the crisis in the ruling party, Okorocha said President Muhammadu Buhari was the only reason the APC was still existing, adding that its survival rest on going back to the basis on how the party was created.

“Just permit me to give you the inside of APC, this word APC was formed by four major political parties that had governors, one was the CPC led by President Muhamamadu Buhari, ACN led by Ahmed Tinubu, ANPP led by Ogbonnaya Onu brought their structure and APGA led by me brought in our structure,” he said.

“Every other person fell into this structure. The PDP group came in and joined us. I gave the name APC, I designed that logo and that was the beginning of the party and we had an understanding.

“That is the party you call APC and unless we go back to where it all started, APC can never see the light of the day and that was how we started and that was what brought President Muhamamadu Buhari to office.

“You cannot rule out the role of these four key people, the then CPC has only one governor in Nasarawa, APGA had only one governor, ACN came with the chunk of the governors and ANPP had a few. And we shared the first positions equally among these four parties.

“Now the founding fathers of the party are relegated to the backgrounds and people are coming with different interests making us play the same kind of politics that PDP played.