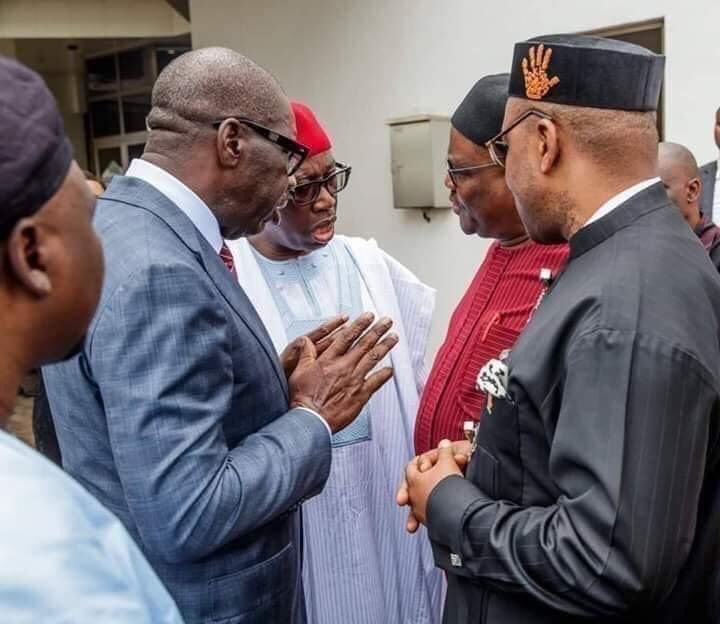 Not a few governors of the Peoples Democratic Party (PDP) have congratulated Godwin Obaseki, Edo State Governor, on his re-election victory.

The Independent National Electoral Commission (INEC) declared Obaseki winner of the September 19 governorship election on Sunday, after polling 307,955 votes to beat his main opponent, Osagie Ize-Iyamu of the All Progressives Congress (APC) who polled 223,619 votes.

“Let me also congratulate our great party, the Peoples Democratic Party (PDP), and all the members of the campaign Council for their hard work over the past few months that led to our victory in Edo State,” Governor Ifeanyi Okowa noted on Twitter on Sunday.

“The brotherhood displayed by all the PDP Governors and party members towards the re-election of Governor Obaseki is what Nigeria needs as we inch towards the 2023 General Elections.

“Moving forward, these election results should serve as a careful reminder that we can only achieve sustainable growth and development when the people are allowed to choose their leaders — at all levels and without any hindrances.”

“Congratulations, H.E., @GovernorObaseki and Deputy Gov Phillip Shaibu for a well-deserved victory. Well done to the National Campaign Council for Edo State of our great party, @OfficialPDPNig led by H.E., @GovWike. The victory is for the people of Edo State. #EdoNoBeLagos,” Governor Makinde of Oyo State noted on Twitter on Sunday.

“Today, our Brothers and Sisters in Edo State have replicated the same wholesome faith and belief in God over the boastful exuberance of ordinary mortals by voting to return a leader who best represents their values and ethos; a doer and not a talker,” Governor Udom Emmanuel of Akwa Ibom also noted via his Twitter handle on Sunday.

“On behalf of the Govt and the good people of Akwa Ibom State, I join our brethren in Edo to congratulate our Brother, HE @GovernorObaseki for securing the trust and faith of the good people of Edo State to superintend over the affairs of the State for another four years.”

“I did it in Sokoto, You did it in Edo. Congratulations to @GovernorObaseki and the @OfficialPDPNig family. A well deserved victory,” Governor Aminu Tambuwal of Sokoto State noted via his Twitter handle.

However, while more congratulations kept pouring in, Reno Omokri, a former aide to ex-president Goodluck Jonathan, mocked two chieftains of the APC Bola Ahmed Tinubu and Adams Oshiomhole who were known to be strongly backimg Ize-Iyamu in the Edo polls.

Reacting on Twitter on Sunday, Omokri, referring to the duo, said two political godfathers were defeated in one day.