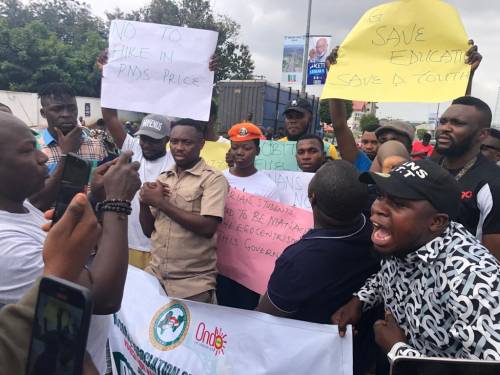 The Zone D of the National Association of Nigerian Students (NANS) has declared its readiness to join civil society organisations in protest against the Federal Government recent removal of fuel subsidy and increase in electricity tariff.

This was confirmed in a statement issued by Kowe Amos, NANS (Zone D) Coordinator.

The Joint Action Front (JAF), among other groups, has resolved to begin a nationwide protest today Wednesday.

“Our country is a major crude oil producer that sells crude while importing refined products for domestic use at higher costs. The argument of the oil cartels that the government should allow prices to be increased is only meant to guarantee their profits while the ordinary citizens lament. This is unacceptable and condemnable and the association stands against such.

“We must not forget so fast what has become of the electricity sector even after privatisation. The government only succeeded in selling it to members of their inner cartel that know nothing about power generation and distribution which has ensured that the people are denied access to these things despite billions invested in the power sector yearly.

“It cannot be gainsaid that the government is not in any way ready to take responsibility. And, where is the profit made from the sales of the electricity sector despite the fact that the government had earlier pumped trillions of naira into the same sector? You can imagine a government selling us to the likes of Femi Otedola, to Abdulsalam Abubakar, to Tunde Ayeni amongst others.

“It is in lieu of this that the leadership of the association declare our unflinching support and also extend solidarity to the mass action declared by the Joint Action Front which is scheduled to commence on Wednesday most especially in Lagos and Ibadan.