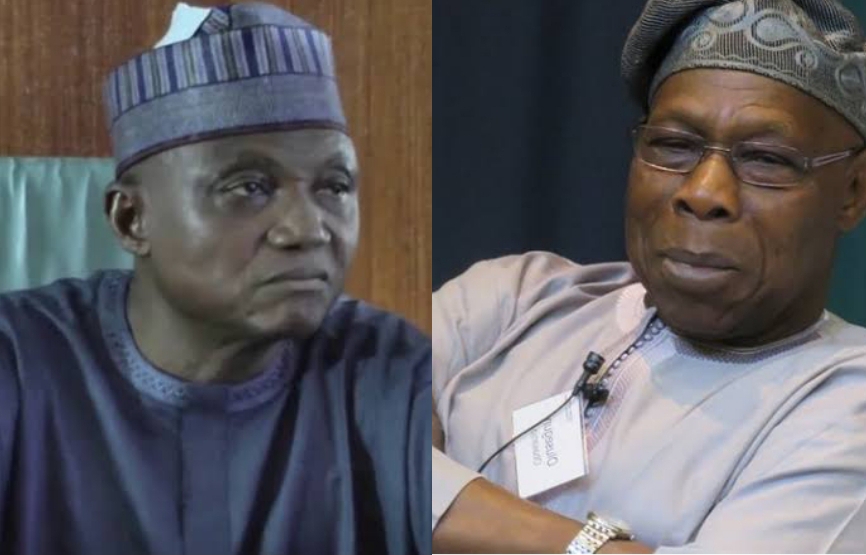 The Presidency has fired back at former president Olusegun Obasanjo over his recent comments that were critical of President Muhammadu Buhari’s administration.

Recall Obasanjo had remarked that Nigeria was currently drifting towards a failed and badly divided state and that the nation’s economy is becoming “a basket case and the poverty capital of the world”.

Delivering a speech titled, ‘Moving Nigeria Away from Tipping Over’ at a consultative dialogue attended by various socio-cultural groups including Afenifere, Middle Belt Forum, Northern Elders Forum, Ohanaeze Ndi Igbo and Pan Niger Delta Forum, the ex-president attributed his grim remarks to the mismanagement of the nation’s diversity and socio-economic development under the current administration.

But reacting on Sunday, Garba Shehu, the President’s Media Aide, berated the former president, stating that he was descending from the lofty heights of Commander-in-Chief to the lowly level of Divider-in-Chief.

While describing the former president’s remark as unfair, Shehu said President Buhari was, contrary to the views of Obasanjo, truly promoting the unity of Nigeria.

He urged the ex-president to stop his pretentiousness and focus more on solving Nigeria’s probem where they exist rather than fanning the flames of ethnic and religious discord.

“In his most recent statement former President Olusegun Obasanjo attempts to divide the nation while President Muhammadu Buhari continues to promote nation building and the unity of Nigeria,” the statement reads.

“The difference is clear. From the lofty heights of Commander-in-Chief, General Obasanjo has descended to the lowly level of Divider-in-Chief (to adapt the coinage of Time).

“Before responding further to the unfair attacks on President Buhari and his administration by the former President, it is important that we categorically state that contrary to the assertions by a few analysts, the recent speech in which President Buhari advised West African Presidents against tenure elongation beyond constitutional limits has been consistent with his long held views on the need to adhere to the rule of law.

“Even though he tried it and failed, the recent uptick in the number of such leaders proposing to do, or actually carrying on in office beyond term limits is sufficient to cause concern among democrats in the sub-region given its prospects of destabilizing the states and the region.

“President Buhari’s advocacy is consistent with his principles and in line with the current policies of his administration and indeed that of the ECOWAS Charter which is that term limits must be respected and that the change of government is only permissible through the ballot box.

“Having cleared this misperception, we hope that Chief Obasanjo would once again sheath the sword and rest the pretentiousness about the Messiah that has (mis)led him to pronounce often wrongly, as he disastrously did in the 2019 elections, about the life and death of Nigerian governments.

“As some commentators are already suggesting, Chief Obasanjo should, in accordance with his mantra as a statesman, get involved with problems solving, when and where they exist instead of helping the mushrooming of a poisonous atmosphere of ethnic and religious nationalism.”

“Surely, he must have disappointed many of his local and foreign admirers by showering commendations on a few extremist groups who have vowed to shun the invitation to the National Assembly to participate in the process of constitutional amendment.

“No doubt, he must have left those admirers confused in announcing the support for the boycott of a democratic process of changing the constitution, at the same time calling for dialogue and engagement.

“The fact that the process he ushered in under his administration with the dubious intention of amendments that sought tenure elongation failed-as did two other attempts by the successor administrations of the same political party- does not in any way justify his dismissal of the exercise by the 9th Assembly as a another waste of time and resources.

“To the credit of the All Progressives Congress-led 8th Assembly, the process of constitutional amendment was kick-started and carried through, paving the way for, among other benefits, the financial independence of local government councils, States Houses of Assembly and the country’s Judiciary.

“These changes have already been signed into laws by the President as mandated by the constitution.

“The recent decisions by the administration as they relate to subsidy withdrawal, helping to plug some of the most horrendous notorious holes and release of scarce resources for the more pressing needs of the people has also not escaped the ire of the former president.

“It’s a known fact that the withdrawal of subsidies had been on the wish list of the Obasanjo-led Peoples Democratic Party, PDP. They failed in achieving these measures because, one there was a shared greed. They plundered the treasury as much as anyone could in the name of either subsidy or waiver with reckless impunity.

“Two, is to say it takes courage and rare statesmanship on the part of a leader to do as President Buhari to shun populism and seek the best interest of the people and the state, providing the kind of reform and development that Nigeria urgently needs.

“This President has run an administration focused on infrastructure and development. He has repaired our damaged relations with neighbours and our traditional allies such as the UK, US, China, Russia, France, Germany, Saudi Arabia and the others with lots of benefits to the country.

“It is a pro-business administration that has used diplomacy to unlock bilateral trade and investment.

“He leads a government that has liberalized the investment climate and market access by achieving reforms that have placed the country in the list of the world’s top reforming economies.

“Nigeria, which other nations had mocked and ridiculed for so many things that were wrong is today progressing at a pace reflecting its size and potential.

“With so much to show and many more coming, it is little surprise that President Buhari would be the object of envy and harsh unfair challenges by politicians who failed to deliver, but continue to nurse ambitions of delighting the audience long after their curtain has been drawn.”