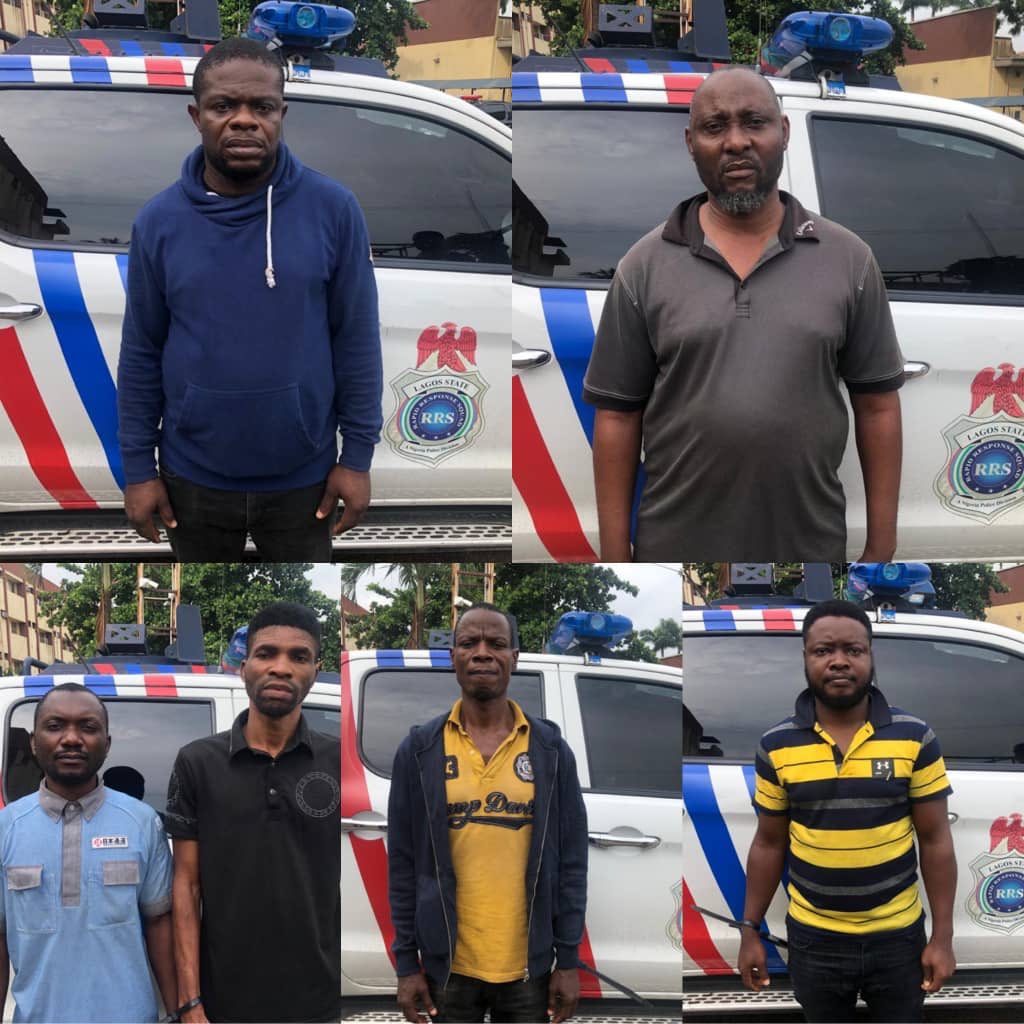 Operatives of the Lagos State Rapid Response Squad (RRS) have arrested a seven-man suspected fraud syndicate who scout for obituaries of rich people to steal the money in their bank accounts.

The seven-man fraud syndicate who were said to be based in Lagos were arrested by the Decoy Team of RRS few days ago, following intelligence it received on their activities.

In a statement issued on Monday, the Lagos Police Command disclosed that the Decoy Team picked up 45-year-old Osita Nwafor, ‘alias Ossy’; the gang leader, from their hideouts “after a technical analysis of the details of the gang and its activities”.

According to the Command, the prompt arrest of the gang first voided a fraudulent transaction of N3 million that had been perfected by the syndicate through a cloned SIM card.

Also, the transfer of N25 million from a locally based bank account and a $220,000 from an international account were botched due their arrest.

Investigation by the Police operatives revealed that the gang members were recruited by Nwafor sometime in 2019 and they work independently and collectively.

According to statement by the Lagos Police Command, Nwafor explained that although he brought the team together, each and every member of the group has his own specialization in the group.

“We sourced for cases and each and every member of the has his own role on each of the cases,” he said.

“Once I have done my own part of the deal (sourcing for SIMs and accounts numbers through which the group perpetrates its fraud), I push it to whoever among the member has to play the next role and that is how we treat our cases”.

The gang leader added, “Apart from this, each member of the gang also has his own splinter group. Whenever they have personal jobs, they also handle on their own.”

According to the Police Command, the suspects confirmed to investigators that they also work with bank insiders locally and internationally.

Nwafor further explained that one of the member of the syndicate, Chike (Nwogu) sourced for foreign and local accounts for money lodgments.

“I don’t know anything about how he does that, I simply hand over to Chike. He has his connections and they work on percentage,” said the gang leader.

“Once they agree on the percentage, when the money comes, everybody gets his own cuts.”

According to sources, police investigations revealed that the fraudsters scout for obituaries of well to do members of the public, use bank insiders to determine the deceased account balance, clone their SIM cards for online transfer.

It was learnt that one of the bank insiders was arrested in Lagos while another one based in Benin is on the run after suspecting the gang has been busted and that police are on his trail, the statement by the Police Command added.

Nwafor disclosed that Nwogu was working on the transfer of $220,000 fresh transaction from a foreign bank (bank name, account holder and parties withheld) before he was arrested.

The Police Command statement further noted, “Another member of the syndicate, Femi Ogundepo, it was revealed, was also working on a fraudulent transaction of N25 million from an old generation bank with an insider connivance (details of the deal withheld).

“James Okonkwo, a close ally of Nwafor, the gang coordinator, it was disclosed allegedly cornered N8 million fraudulent proceed of the gang shortly before his arrest.

“This, it was learnt, was the cause of a serious dispute between Nwafor and Okonkwo, who just came back from the village.”

The Command added that all the suspects have been transferred to the Special Anti-Robbery Squad (SARS) for further investigations and prosecution.