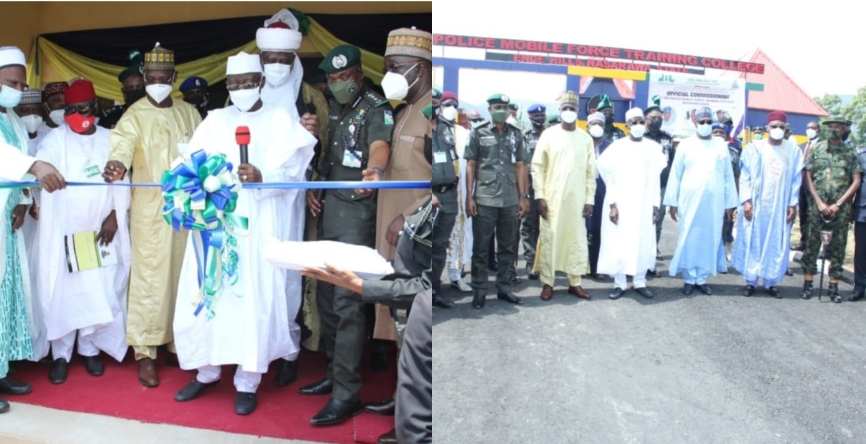 Frank Mba, Force Spokesperson, made the disclosure in a statement on Wednesday.

According to Mba, the President, who was represented by the Honourable Minister of Police Affairs, Muhammad Maigari Dingyadi, observed that the construction of the college comes as part of unwavering determination by his administration to meet capacity building needs and training of Tactical Squads for the ever expanding operations and deployment needs of the Nigeria Police Force.

“This will further address the manpower needs of the newly created PMF Squadrons across the country,” the statement added.

On his part, the Inspector General of Police (IGP), Mohammed Adamu observed that the college was established as part of the strategic approaches of the Force to strengthen the capacity of the special and tactical operations arms of the Nigeria Police Force in dealing with current and emerging security threats in the country on a sustainable basis.

“The new PMF College will complement the existing PMF Training Colleges in Gwoza, Borno State (North-East) and Ila Oragun, Osun State (South-West) and will also serve as a training ground for police personnel that will be deployed for local and international assignments such as the UN/AU Peacekeeping Operations as well as support for Counter-Terrorism Training programs,” the Force spokesperson quoted Adamu to have said.

He added, “The IGP, while noting that the construction of the college was through enormous goodwill and support from the Nasarawa State Government, well-meaning individuals and corporate bodies as part of their Corporate Social Responsibilities (CSR), thanked the State Government, the Executive Governor of Nasarawa State, Governor Abdullahi Sule, HRH Justice Sidi Bage Muhammad I (Rtd), the Emir of Lafia Emirate and all other traditional rulers, the host community, corporate organizations and well-meaning Nigerians whose goodwill and exceptional support ensured the accomplishment of the project.”

“The IGP also thanked them for being physically present during the ceremony.”