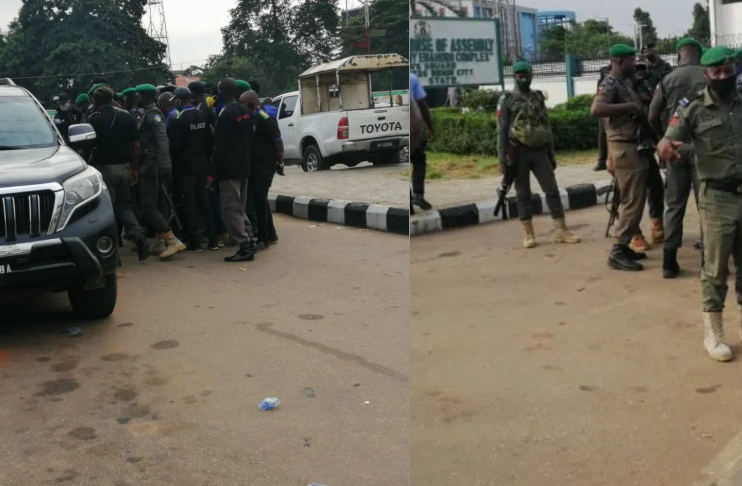 The United States Mission to Nigeria has expressed its dismay over actions displayed by politicians in the crisis rocking the Edo State House of Assembly.

The state Assembly has been in turmoil since the impeachment of Yekini Idiaye, the deputy speaker on Wednesday.

Frank Okiye, the Assembly speaker, had said Idiaye’s removal was due to his alleged plan with members of the All Progressives Congress (APC) and Imo State Governor, Hope Uzodinma to illegally and violently take over the assembly.

Following that, security forces Thursday barricaded the Assembly complex in Benin City. While it was unclear on whose directive the security operatives were acting on, Okiye who had raised the alarm of alleged take-over of the complex, claimed APC leadership were behind the action.

Crusoe Osagie, incumbent Governor, Godwin Obaseki’s spokesperson, linked the change in the assembly’s police team to a plot to take over the venue and “illegally inaugurate 14 dissident members-elect” believed to be loyal to Mr Oshiomhole, according to Premium Times.

However, when contacted, Chidi Nwabuzor, Edo State police spokesperson, argued that the police were there to do their job which is “maintain law and order.”

Perhaps the presence of the security forces at the complex made 17 lawmakers in the state, including 14 lawmakers-elect who were not inaugurated in 2019 and reportedly loyal to Ize-Iyamu to convene at an undisclosed location, impeach the Assembly Speaker and elect Victor Edoror who was similarly impeached as deputy speaker in 2018, as his replacement.

Reacting in a statement on Friday, the US Mission said it was concerned over the deteriorating political climate in Edo, particularly “allegations of interference by security forces in political matters”.

While reiterating their supports for Nigeria’s democratic process, it called for all stakeholders to work toward a free, fair, transparent, and peaceful electoral process.

“The U.S. supports a democratic process where the will of the people is reflected in the results, and does not favour any party or candidate,” it said.

“We are concerned with reports of the deteriorating political climate in Edo and are disappointed with the role played by some political actors in the state.

“We are especially concerned with allegations of interference by security forces in political matters, which we will continue to monitor closely in the run up to gubernatorial elections in September.

“As we approach the 2020 off-cycle elections in Edo and Ondo, we urge all stakeholders to work toward a free, fair, transparent, and peaceful process.

“We encourage all stakeholders, including INEC, political parties and the security services to continue to improve the electoral process. We look to Nigeria as an important leader on the African continent.”

The US Mission added that as a democratic partner of Nigeria, it remained committed to working together to achieve mutual goals of peace and prosperity for the citizens of both our countries.

MERIDIAN SPY reported earlier the state lawmakers are divided into two camps, with about seven reportedly loyal to the incumbent Governor Obaseki and the other 17 to Pastor Osagie Ize-Iyamu, the governorship candidate of the APC.