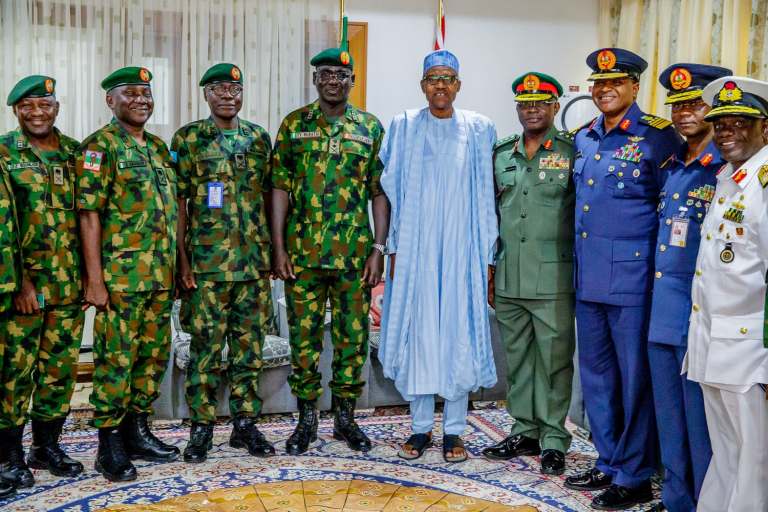 David Umahi, Ebonyi State Governor, has rejected the call for sack of service chiefs over the worsening state of insecurity in the country.

Advising President Muhammadu Buhari to retain them, Governor Umahi rather called for increased military funding and other logistics as well as enhance programmes that would make them work optimally.

The Governor made the call on Friday in Abakaliki while laying the foundation stone of the Nigerian Army Reference Hospital, Abakaliki.

“The president should also increase his meetings with them and enhance mechanisms that will make the civil populace co-operate and provide them with relevant information,” he said.

“It is difficult for people to do anything without information and at this stage of our security situation, whosoever that is coming to replace them will start ‘learning the ropes.”

The Governor further remarked that Nigerians “like change a lot which makes everyone desire to taste every seat”.

He added, “This is not what we need at this crucial time of our security challenges as every decision taken by the present service chiefs are not taken by them alone, but with other senior officers.

“No man wants to die, so there is no way the army can sabotage itself.

“It was unfortunate that my colleague (Borno Governor) was ambushed, but I commend the army for the way it handled the matter professionally and with humility.”

Governor Umahi, however, pledged the state government’s co-operation to ensure the completion of the hospital and commended the army for its friendly disposition to the Ebonyi civilian populace.

Lt.-Gen. Tukur Buratai, the Chief of Army Staff who was represented by Lt.-Gen. Lamidi Adeosun, the Chief of Policy and Planning of the Nigerian Army, said the 200-bed reference hospital was in line with the army’s policy of enhancing the welfare of its personnel and their families, including families of the deceased.

lLt.-Gen Adeosun said that the occasion was a demonstration of the army’s resolve to provide efficient healthcare delivery to its personnel and the populace within the South-East zone of the country.

“The internal security efforts of the army have resulted in casualties which require a tertiary level of medical care of which our reference hospitals provide,” he said.

“The hospital will cater for troops in various operations, forward operating bases in Taraba, Benue, and Cross River and provide tertiary health care for army formations in the south-east and south-south geo-political zones.”