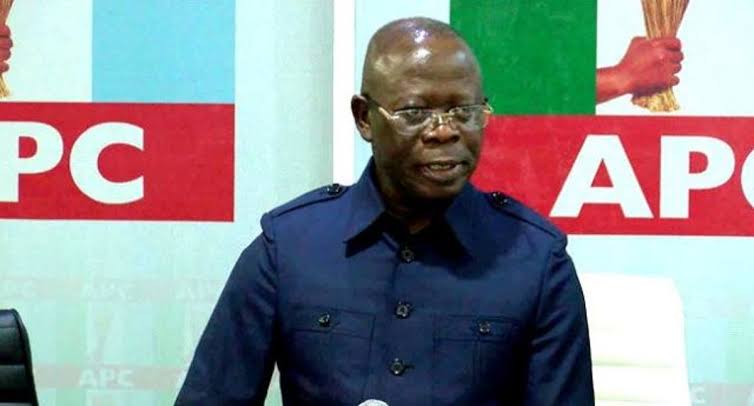 The Progressives Governors’ Forum (PGF), the umbrella body of state governors of the All Progressive Congress (APC), has accused former national chairman of the party, Adams Oshiomhole of hijacking the ruling party’s campaign for Pastor Osagie Ize-Iyamu, its governorship candidate in the September gubernatorial election in Edo State.

In a statement issued on Friday, titled ‘Progressive Politics – Which Way, APC?’, Salihu Lukeman, the PGF Director-General, accused Oshiomhole of turning Ize-Iyamu’s campaign into a personal battle with Godwin Obaseki, the incumbent Governor and candidate of the Peoples Democratic Party (PDP).

“Comrade Oshiomhole has relocated to Edo State and taken over the APC campaign and the campaign is proceeding in a manner that suggests the Edo State governorship election is an extension of the personal battle between the governor, Mr Godwin Obaseki, and Oshiomhole,” said Lukeman.

“The APC campaign is personalised around Comrade Oshiomhole and the candidate of the party, Pastor Osagie Ize-Iyamu, is an onlooker.

“The soundbite from the Edo APC campaign is so offensive to the point where Comrade Oshiomhole appears to be disowning almost every APC (member) in Edo State between 2016 and now.

“To that extent, it simply means Comrade Oshiomhole is disowning himself, which may be why he went on his knees begging the Edo people for forgiveness.”

The PGF DG further reminded the APC leaders that the last leadership crisis in the party was triggered by the deep concerns around the diminishing electoral viability of the party.

“This may be the problem, partly because, if our leaders are unable to recognise that the APC is faced with the problem of diminishing electoral viability, then there is a big problem.”