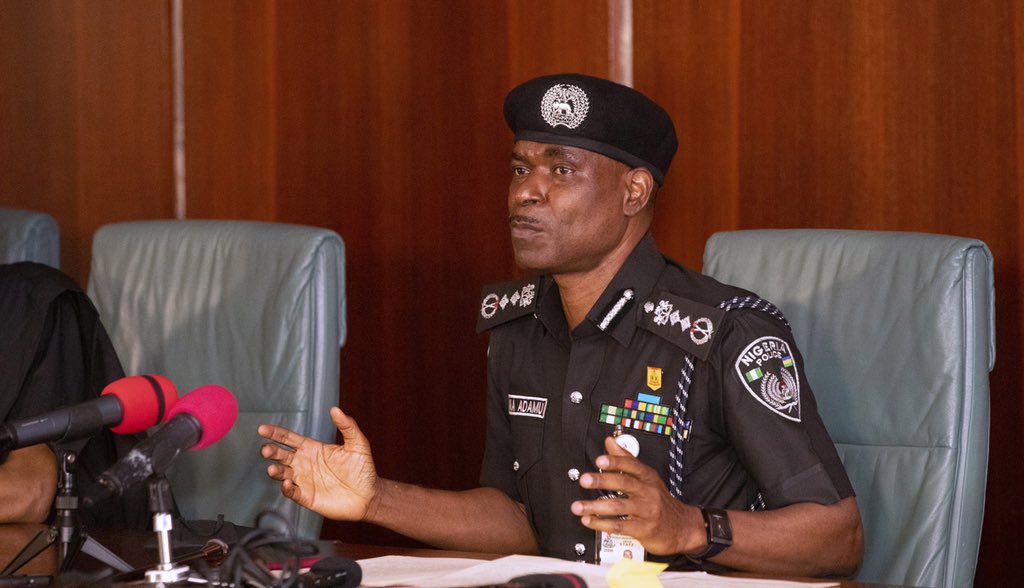 The Nigeria Police Force has denied report the Inspector-General of Police, Mohammed Adamu was involved in a multi-billion Naira fraudulent scheme for the purpose of establishing a Mobile Police (MOPOL) Training School “in his home town of Endehu in Nasarawa State”.

In a statement on Tuesday night, Force Spokesperson, Frank Mba described the allegations in the report which was published by Sahara Reporters on August 03, as ‘misleading’ and ‘baseless’.

According to Mba, the report by the online news platform referenced several “unnamed and unverifiable sources” to allege that the IGP ‘used his office to unlawfully compel and in fact threaten Mobile Police Commanders into generating millions of Naira monthly through illegal means for the purpose of establishment of a MOPOL Training School in his home town of Endehu in Nasarawa State’.

“It was published in the tradition of Sahara Reporters to blackmail and impugn the credibility of strategic leaders of the country in an apparent attempt to advance their ignoble and unpatriotic intentions,” Force spokesperson noted in response to the allegations.

“While being conscious of the need not to glorify the falsehood contained in the reportage, it is considered expedient and in national security interest to put the facts straight. In this regard, it is to be clarified as follows:

“The establishment of the Police Mobile Training School in Endehu, Nasarawa State, North Central Geopolitical Zone of Nigeria was informed by overriding national security consideration on the need to strengthen the operational capacity of the special forces of the NPF

“Also, the insinuation that the IGP sited the facility ‘in his hometown of Endehu in Nasarawa State’, is also utterly misleading. For the avoidance of doubts, Endehu is not the hometown of IGP Adamu. He is, in the contrary, from Lafia.

“The allegations that the IGP used his office to threaten Mobile Police Commanders into generating Millions of naira monthly through illegal means for the establishment of the institution is also totally false.

“It is on record that the parcel of land where the institution was sited was donated to the Police with the full complement of the Certificate of Occupancy which the Executive Governor of Nasarawa State publicly presented to the Nigeria Police.

“The acquisition of the land was, therefore, without any financial commitment by the Police.

“Furthermore, the construction of the facility was achieved with the support of the Nasarawa State Government and well-meaning corporate bodies within the context of their Corporate Social responsibility (CSR).

“In all instances, all the support so extended were not in cash but in form of donation of materials.

“The only involvement of some Squadron Commanders was to ensure the delivery of some of the construction materials so donated by the corporate bodies.

“Hence, the allegation that the IGP ‘had each Squadron Commander cough out nothing less than N500,000 monthly for the purpose of erecting different structures in the training school’ is a preposterous and feeble attempt to discredit the innovative reasoning that engendered the successful implementation of the critical national security asset that the facility represents.

“The construction of the project through corporate intervention is a demonstration of the commitment of the Force leadership to meet its obligation to citizens in terms of their safety and security and in furtherance to the Reform agenda of the Nigeria Police Force.

“It was not established as a personal asset of the IGP. Rather, it is a national security legacy project.

“It is worth mentioning that this is not the first time that corporate organisations and governments at all levels are assisting the police to bridge operational and infrastructural gaps.

“Dangote Foundation, the Central Bank of Nigeria, Nigeria Bankers’ Forum, State Governments, PCRC, and well-meaning individuals among others have in the past donated fleets of vehicles and have rendered other supports to the Police.

“The attempt by Sahara Reporters to malign the Force leadership shall not in any manner impact on the firm determination of the Nigeria Police Force to advance its strategic plan and to continue to adopt innovative reasoning in changing the policing narratives in Nigeria towards stabilizing the internal security order.

“While members of the public are called upon to discountenance the content of the publication in its entirety, it is to be noted that the Nigeria Police Force has instructed its legal team to initiate legal actions against Sahara Reporters to address the defamatory and libellous components of the report.”