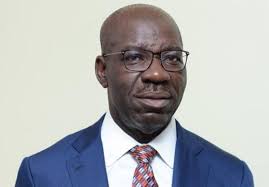 The Edo State Governor, Godwin Obaseki has approved the appointment of Osaze Ethan Uzamere as his new Chief of Staff, following the resignation by his former COS, Taiwo Akerele.

Meridian Spy had yesterday, Saturday reported that Akerele officially resigned from his position.

He based his decision to quit the position as Chief of Staff to his principal, Obaseki on administrative and governance grounds.

“My decision to exit the government is based on administrative and governance grounds,” he stated.

However, in a statement, Secretary to the State Government SSG, Osarodion Ogie Esq., said the appointment of the new Chief of Staff, Uzamere takes effect immediately.

The 38-year-old appointee is the son of Senator Ehigie Uzamere, who represented Edo South Senatorial District in the National Assembly between 2007 and 2011.

Before his appointment, he had served as Executive Assistant to Governor Obaseki.

An investment banker, Uzamere, is a graduate of Stony Brook University, New York, where he majored in Computer and Electrical Engineering.