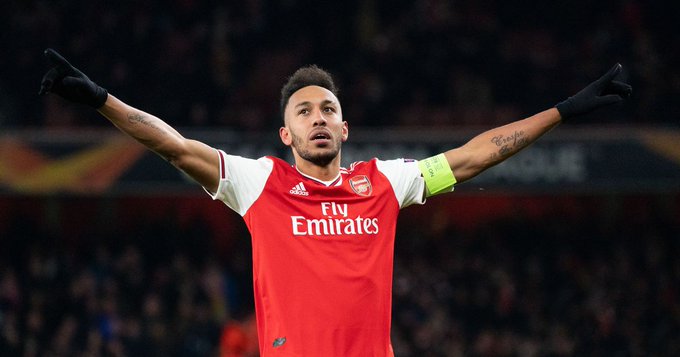 Mikel Arteta has been told to sell off Shkodran Mustafi and Henrikh Mkhitaryan in a bid to finance a new deal to keep striker, Pierre-Emerick Aubameyang in the club.

Aubameyang who has smashed 61 goals in 97 games for the Gunners, is approaching the final 12 months of his contract at the Emirates and has so far stalled on signing an extension.

The Gunners club could however be forced to sell him this summer rather than risk losing him for nothing.

Former Arsenal’s Charlie Nicholas has suggested his former club cash in on Mustafi and Mkhitaryan to raise funds.

“Mikel Arteta wants five or six out and he wants that money to rebuild. If nothing more is in the pot, sell to rebuild,” Sky Sports pundit, Nicholas told Sporting Life.

“If you are doing that as a financial package, you are not buying to replace Aubameyang. You can get rid of Shkodran Mustafi and Henrikh Mkhitaryan, who has been out on loan. This will all help to filter through, so there are easy things to do.

“My preference would be to offer Aubameyang what he wants. Everyone will flag up his wages.

“Give him what he wants, get rid of dead wood, you have the kids, and it would not cost £200m to challenge for the top four once more.

“I have been told differing scenarios, especially with Mesut Ozil. Is it possible Ozil could move on? Could this then help fund wages for Aubameyang and others? If they get him off the wage bill without getting anything for him, it will not be too bad.

“There are differing ways of doing this, but more than anything, I would want Arsenal to renew Aubameyang’s contract for three or four years.

“Even if Arsenal are average as of next year, they cannot decline much more, it has reached its bottom.”