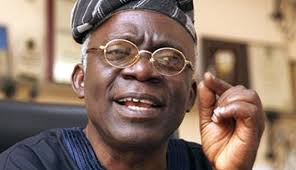 Human right activist, Femi Falana, has urged President Muhammadu Buhari to declare a state of emergency due to the rising number of confirmed cases of the deadly coronavirus disease in the country.

The federal and some state governments had announced some stringent measures to prevent the spread of the COVID-19 which its citizens have partially complied with.

Reacting to this, the Senior Advocate of Nigeria, Falana, on Monday, urged the president to take legal measures by issuing a proclamation of a state of emergency to enable the government enforce its directives using security agencies in the country.

Falana stated: “In order to stem the dangerous trend the federal government should put necessary legal measures and mechanisms in place without any further delay.

“In particular, the attention of the Nigerian people ought to be drawn to section 45 of the Constitution which provides that the fundamental rights of citizens to personal liberty, freedom of movement, freedom of assembly and association etc may be infringed upon or restricted in the interest of public health and public safety.

“Therefore, President Muhammadu Buhari should, as a matter of urgency, issue a proclamation of a state of emergency in the entire Federation pursuant to section 305 (1) of the Constitution.

“Once the proclamation is issued by the President and published it is required to be approved by a resolution supported by two-thirds majority of each house of the national assembly.

“Once the measures are set out in the said proclamation they will have the force of law capable of being enforced by the police and other security agencies.”

The human right lawyer said if President Buhari does not declare a state of emergency, the state governors should issue Executive Orders to address the health challenge.”

The country has recorded 36 confirmed cases of the deadly coronavirus including 1 death and 2 recoveries.