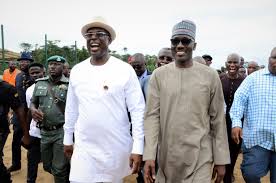 The Nigerian National Petroleum Corporation NNPC has said the petrol pump price in the country will now sell at its retail stations at N125 per litre from Thursday March 19.

The minister of state for petroleum resources, Timipre Sylva had after the Federal Executive Council FEC meeting on Wednesday issued a directive to the Nigerian petroleum corporation to reduce the ex-coastal and ex-depot prices of PMS (petrol) to reflect current market realities as approved by the president, Muhammadu Buhari.

The NNPC group managing director, Mele Kyari said in line with the directive issued by the minister, all NNPC retail stations nationwide have been directed to change the retail pump price to N125 per litre.

Kyari stated, “In compliance with the directives of the honourable minister of state for petroleum resources on PMS pricing, the corporation has reviewed its ex-coastal, ex-depot and NNPC retail pump prices accordingly.

“These reductions will, therefore, translate to N125 per litre retail pump price.”

The petroleum corporation GMD said though the price adjustment will come at a cost to the corporation, however, “NNPC is delighted to effect this massive reduction of N20/litre for the benefit of all Nigerians”.