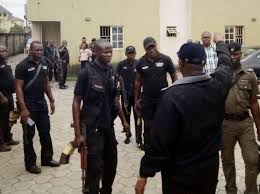 The House of Representatives ordered the investigation of the killing of Remo Star FC football star, Tiyamiyu Kazeem allegedly by a Special Anti-Robbery Squad (SARS) operative.

The green chamber ordered its committee on police affairs, justice and human rights to investigate and ensure that “justice is not only done but seen to be done.”

The lawmakers also urged the Inspector General of Police to review the objectives behind the establishment of the tactical squads and restrict their meddling on civil and financial crimes.

They also urged the Nigeria Police to establish a Special Bureau Unit to monitor the conducts of police officers, arrest and charge erring ones.

A lawmaker representing Ogun, Adewunmi Onanuga, moving the motion on Thursday stated that prolonged negligence of the brutality by the dreaded Special Anti-Robbery Squad and the Zonal Intervention Squad (ZIS) on citizens, especially the deceased footballer, may result into a crisis between the police and the citizens.

He further condemned the unlawful arrest, detention and torture to extort money from unsuspecting young and old members of the public.

It should be recalled that Remo Star FC footballer Tiyamiyu Kazeem was killed allegedly by SARS operative in Abeokuta which sparked outrage from citizens and subsequently led to a renewed call for scrapping of the group.