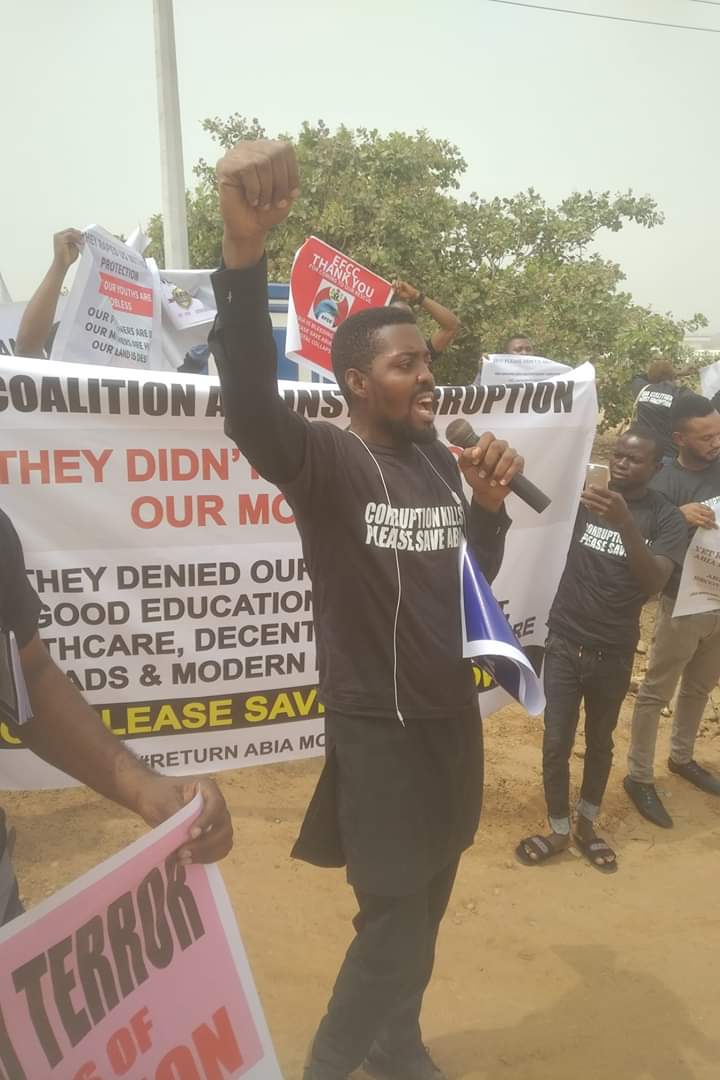 A coalition of civil society groups under the aegis of “Abia Coalition against Corruption” has called on the Economic and Financial Crimes Commission (EFCC) to quicken its investigation on the former governor of Abia State, Theodore Orji and son, Chinedum Orji over the alleged N500 billion state fund that was diverted. The group made their demand at the EFCC Complex in Jabi, Abuja on Wednesday.

The protesters who were seen in black t-shirts with the inscription, ” Corruption kills; please help save Abia,” matched in unison on the streets of Abuja chanting anti-corruption songs.

The protest match took-off from the Unity Fountain Square, from where protesters matched through the National Secretariat Complex, pressing forward their demands in firm coordination.

Leader of the group, Comr. Honest Offor said the protest was simply to register their grievances over the outrageous embezzlement of public funds in the state by the immediate past governor of the state, who is also a serving senator, Theodore Orji and his son, Mr. Chinedum Orji, who is the current speaker of Abia State House of Assembly.

Comr. Offor said that that were forces pressurising the EFCC to cover up the renewed case of N500b fraud perpetuated by the immediate past governor and his sons. Hence, in fear of possible compromise in investigating the allegations, the group set out to warn against such move and to tip the EFCC to ensure that justice is served at the end of the day.

He, however, insisted that due process must be followed in investigating the issue without compromise, and justice should be served accordingly in the end if the accused are found culpable.

A letter of demands by the group was submitted to the Economic and Financial Crimes Commission’s (EFCC) in order to ensure that the investigation continues.