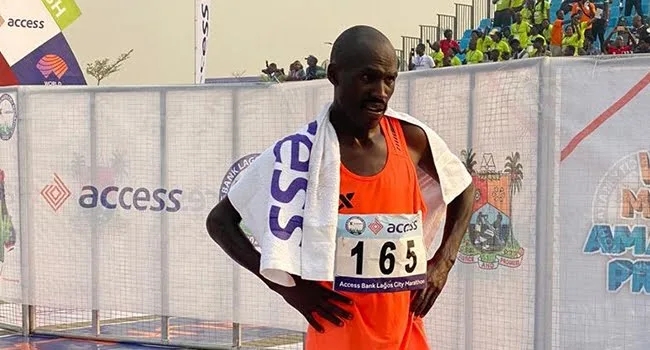 A Kenyan athlete, David Barmasai Tumo, has emerged winner of the 2020 Access Bank Lagos City Marathon after finishing top at the perennial sports event in Lagos.

The sports event took place on Saturday, with the race kicking off in front of national stadium Surulere down to Eko Atlantic where the grand reception was held in colourful glamour and elation from viewers and participants who thronged from across the African continent.

The annual event which had a total of 42km racing distance was graced by both lower and upper-class athletes across the African soil.

The event which was put together and sponsored by Access Bank PLC came with the promotional hashtag, “MorethanARace.”

The winner, David Barmasai Tumo, completed the 42km race in two hours thirty minutes, thereby breaking the long-held record of four years as the fastest winner ever in the history of the event.

Barmasai, walked home with $50,000 as the overall winner of the event. An additional record-breaking bonus of $20,000 was also given to him, making it a total of $70,000 for the fortunate Kenyan athlete.

Sharon Jemutai Cherop, a Kenyan female athlete finished as the fastest female; she, therefore, emerged as the female winner of the race. Cherop had finished at exactly two hours twenty minutes racing time.

Governor of Lagos State, Babajide Sanwo-Olu, who was one of the eminent dignitaries that graced the event expressed joy over the conduct of the event; he as well lauded Access Bank PLC for being the sponsor and brain behind the event.